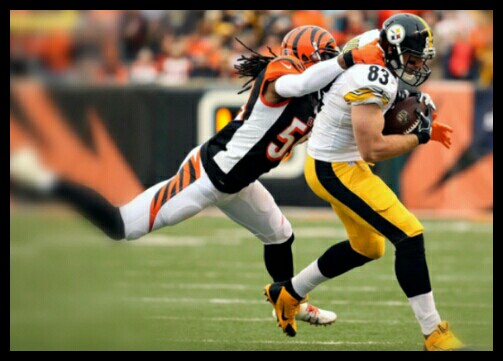 Heath Miller is one of the most recognizable players on the Pittsburgh Steelers roster.  The veteran tight end hears fans yell his first name every time he touches the ball.

Miller has been an important cog in the Steelers offense and led the team in receptions against the Cincinnati Bengals in week 14 of the 2015 NFL regular season.  Miller recorded ten catches for 66 yards; his third career game with ten receptions.  Four of those catches converted necessary third downs.  His blocking helped clear the way for running back DeAngelo Williams’ outstanding rushing performance, paving the way to a Steelers win and earning the Steelers Gab Player of the Week honors.

Chris Boswell – made four field goals and three points after the touchdown, leading the Steelers in scoring. Five of his eight kickoffs went for touchbacks.

Williams – scored the only two offensive touchdowns against the Bengals in a 33-20 victory while rushing 23 times for 76 yards. By adding 15 yards receiving, he finished the game with 91 yards from scrimmage.