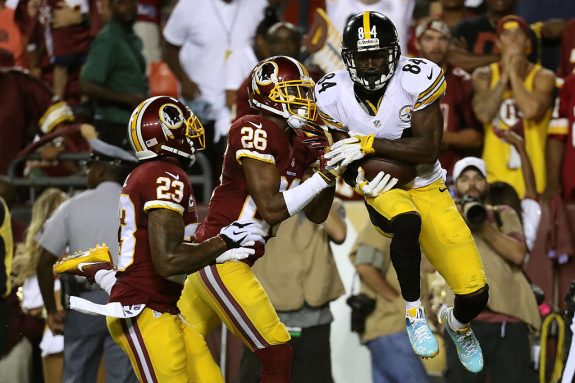 It was the matchup that was most talked about all week long as the Steelers got ready to play the Redskins in the season opener in the Nation’s Capital – that being the battle Steelers wide out Antonio Brown going up against new Skins corner Josh Norman.

Brown, as he normally does, made it look very easy Monday night.

The receiver had a big night for the black and gold, helping them out in a huge 38-16 victory. All Brown did was score the Steelers first TD of the year on a 4th down play, and also pull in another score in the third quarter with the score at the time 17-6.

Brown pulled in eight catches for 126 yards and two scores, thus earning the “Steelers Gab Week One Player of the Week” Award.

The Steelers wide out was once again the biggest weapon in the Steelers offense, and was amazing no matter who was covering him on Monday night.