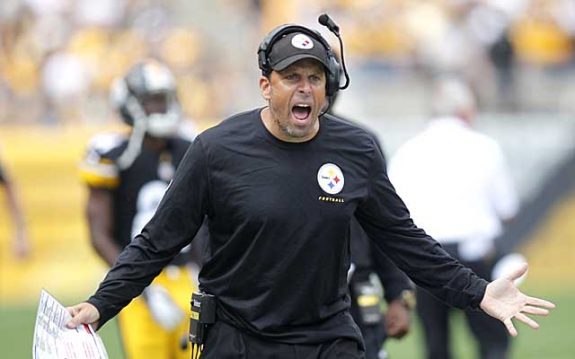 It’s a popular hashtag on Sunday afternoons when the Steelers offense seems stuck in the mud.

That hashtag won’t be going anywhere soon for Steelers fans, as Todd Haley won’t be leaving the team for the near future. The coordinator “told people he was not interested in any head coaching jobs this year and so there was no publicly stated interest in him,” this according to the Post-Gazette’s Ed Bouchette.

While dumping on Haley may be a popular topic, the Steelers offense overcame quite a bit in 2015, and while the season didn’t end with a Super Bowl ring, if healthy, the team should again employ an explosive offense in 2016.

This last season having to use a number of backups at key positions throughout the season, the Steelers offense was still ranked fourth in the NFL with 26.4 points per game.

Impressive considering they had Ben Roethlisberger for 12 games, LeVeon Bell for six, Martavis Bryant for 11, and lost two huge pieces on the offensive line in center Maurkice Pouncey and tackle Kelvin Beachum.

The Steelers offense should resemble that of a well-oiled machine when they take the field in 2016, as Roethlsiberger played banged up for nearly the whole season, but was still able to throw 21 touchdowns.

Bell and DeAngelo Williams as the two running backs provide the best 1-2 punch at the position in the NFL.

Bell is going to play with a chip on his shoulder after being knocked out in the first Bengals game, and Williams will want to pick up where he left off after getting injured in the final game of the regular season against the Browns.

This team and specifically the offense is going to be right up there as the NFL’s best again in 2016, and Haley should get a lot of kudos for molding them into the unit they are today after joining the team in February of 2012.

So the next time you’re ready to roll out the #FireHaley hashtag on Sunday, just remember how good this unit has played in the three with him running the show.

As long as they are healthy, 2016 should be a fun ride when the offense takes the field for the black and gold.

Offseason Surgery on Tap for Six Steelers Players
Rooney Talks Salary Cap and Signing Players: “We Will Have Work To Do”