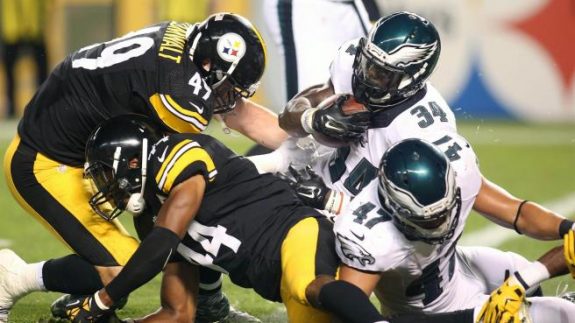 For the first time since their last Super Bowl outing in 2010, the Steelers sit at 2-0, and quickly are garnering national attention as a powerhouse in the NFL after wins over Washington and Cincinnati.

Last week the Steelers played exactly the game they needed to against the Bengals, they were smart, they made very few mistakes, and were physical in the run game with DeAngelo Williams rushing again for over 100 yards in the win in tough conditions.

This week it’s a new challenge against a team that is getting attention for their young rookie quarterback, Carson Wentz. The rookie is 2-0 and ESPN is acting like he’s the next Dan Marino, despite beating two awful teams, Cleveland and Chicago.

So will the Steelers get to 3-0? They are road favorites, and today we take a look at the three keys to getting the black and gold to 3-0 before they get another weapon, Le’Veon Bell, back in the lineup for week four.

1. Shut Down the Eagles on the Ground

Philadelphia doesn’t have big names backs, but they’ve done a nice job thus far in the first two weeks against Cleveland and Chicago, rushing for 233 yards on 66 carries, a 3.5 yards average per attempt. Ryan Mathews and Darren Sproles are two players the Steelers have to watch, and the Philly offensive line has also done a nice job in the first two games. The Eagles have thrown different looks the first two games, lining up as many as three tight ends on one side, or even using 320-pound defensive tackle Beau Allen as a fullback. If the Steelers can hold this run game down, it will put more pressure on Wentz to make plays.

Last week with a rain the whole game, Steelers QB Ben Roethlisberger had to run around quiet a bit, but still was able to make plays and throw for three touchdowns. This week the challenge is to make sure he doesn’t get hit, in or out of the pocket. The Eagles are running a much more hard hitting defense than last season, and with Jim Schwartz running the show there’s a focus on hitting the quarterback and bringing him down. Ben can take hits, but a major key for Sunday will be to keep those hits to a minimum, and make sure that he’s got time throw on passing downs.

Jordan Matthews is the Eagles biggest downfield threat, and Darren Sproles is another player who at the blink of an eye make a big play. Both these players has to be the focus of the Steelers defense, as Matthews is looking for his 4th straight home game of over 100 yards with a TD catch. The quickest way to find yourself in trouble on the road is give up big plays and find yourself behind having to play catch up. Don’t let these two players come up with something big, and it gives the Steelers a much better shot at getting out of Philly 3-0.

Prediction: This is a game that easily could come down to the Steelers getting pressure on Wentz, forcing some mistakes, and as stated above make sure that some of the Eagles mentioned don’t come through with big plays. Wentz may be a good quarterback, but let’s call it what it is, he’s played two games against two bad teams, he’s not yet Big Ben, Marino or Peyton Manning. If the Steelers do what they always do against rookies, which is throw different looks, pressure him, and force a few mistakes, the Steleers should get a win. Keep Ben upright and hit a couple big plays of their own, and the Steelers will get ready in week four for a Chiefs team on Sunday night October 2nd. Steelers 27 Eagles 14