Flashback: Steelers Get a Rare Win Over Brady and the Patriots in October of 2011 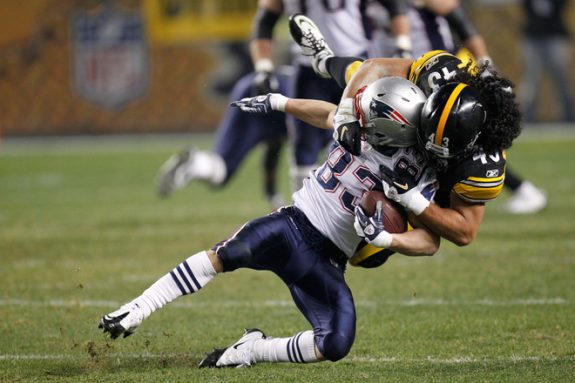 The Steelers played maybe their best game against the Patriots at Heinz Field back on October 30th 2011, a game in which they finally did something they normally never do, hold Tom Brady in check.

Yes people will point to the 2004 game in which they stopped the Patriots record setting 21-game winning streak as maybe the best game the Steelers ever played against Brady, but seven seasons later the Pats and Steelers did battle a day before Halloween at Heinz Field, and the Steelers gave a complete effort against a Pats team that came into Pittsburgh with a 5-1 record.

The Steelers were 5-2 entering the game, and while that 2011 season ended with a bitter overtime loss to Tim Tebow and the Broncos after the club went 12-4 in the regular season, one of their high points was the beating of the Pats in front of a loud home crowd at Heinz.

Today we look back at that game in our ‘Flashback’ and game story from Sunday, October 30th as the Steelers beat the Pats 25-17 in the 8th week of the 2011 season.

Steelers Vised in Miami by Dolphins; Fall to 4-2 Following 30-15 Beating
Steelers at the Crossroads; Is the 2016 Season Slipping Away After Three Straight Losses