Colts QB Andrew Luck in Concussion Protocol; May Not Be Able to Face Steelers Thanksgiving Night 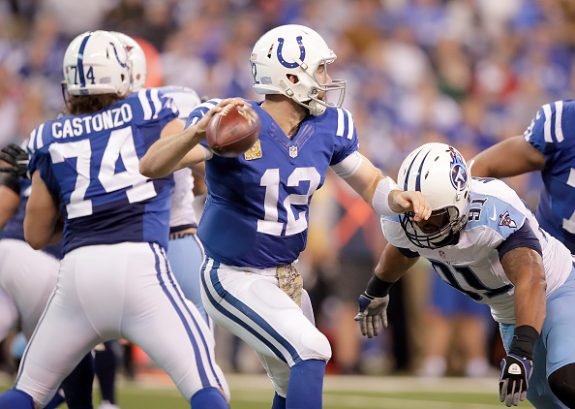 The Steelers may not have to face Colts franchise quarterback Andrew Luck on Thursday night, as Indianapolis coach Chuck Pagano said today the quarterback is in concussion protocol after being hurt in the team’s win over the Titans Sunday.

The team having Luck available for the Thanksgiving battle is unlikely, as history says it usually takes easily a few days to get cleared from a concussion, and with the short week Indy will almost for sure have to turn to backup Scott Tolzien.

The 29-year-old has just two NFL starts to his name, and hasn’t seen regular-season action since 2013.

The Steelers last meeting with the Colts also featured a backup quarterback, as Matt Hasselbeck started for the Colts in the teams meeting last year on a Sunday night, a game the Steelers won at Heinz Field 45-10.

The game will surely have a different look without Luck, who this season has thrown for 2827 yards, 19 touchdowns and eight interceptions.

Coach Mike Tomlin’s Post Game Press Conference Chatting About the Win in Cleveland
Who is Colts QB Scott Tolzien – and Should the Steelers Fear Him Going Into Thursday’s Matchup?