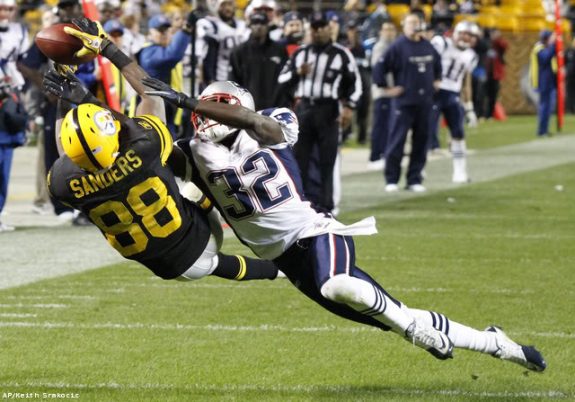 It’s now the in thing to go get former Steelers to come out and talk about situations they know nothing about, like the current ongoing situation between Antonio Brown and the Black and Gold.

You should check this out, as the latest to give his opinion on the matter is one-time Steeler Emmanuel Sanders, who left the team for greener pastures to go play in Denver.

The wide out, who has had success with the Broncos and even a Super Bowl ring, was on NFL Network and said that while he feels that Brown was ‘100 percent’ wrong for not being on the field and practicing with the team in week 17 in prep for their game against the Bengals, he also thinks the team needed to handle the situation better.

Here’s part of what Sanders had to say.

“This is the leader of the team and you’re going to throw somebody under the bus when you could’ve handled that interview totally different,” Sanders said on the NFL Network.

“You didn’t even have to throw Antonio Brown’s name in that or even say he had to do that. You literally took pressure off of you and put that whole situation on Antonio Brown. I bet Antonio Brown is frustrated by that.”

Sanders stated that there is “plenty of blame to go around,” with the entire organization as well as with Brown about the drama, but it feels like he’s putting more of the blame on Mike Tomlin and the Steelers and not on Brown.

James Harrison, who made his long time living with the Steelers, is another voice in the situation who obviously is very much against the Steelers, even having Brown on his instagram during Tomlin’s presser when he was explaining the entire Brown saga.

We will see who the next former Steeler to come out and bash the organization, Tomlin and whoever else they can find will be, as when it rains it pours, and right now it’s very much raining on the entire Steelers organization.

What Can the Steelers Expect If They End Up Trading Antonio Brown?
Steelers Losing Popular O-Line Coach Mike Munchak to the Broncos