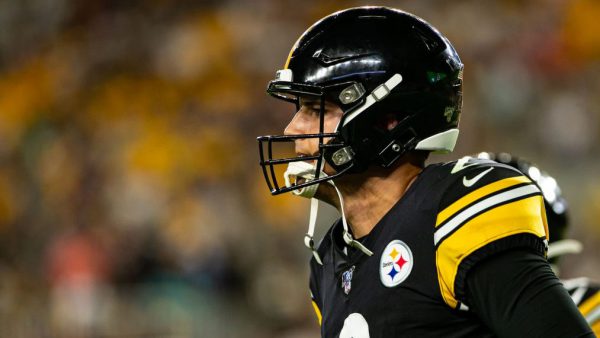 The Steelers have been looking for a solid backup quarterback for awhile after having Landry Jones on the roster for a couple of seasons, and it looks like Mason Rudolph is making a case to take that role for 2019 and beyond.

Yes the team has Josh Dobbs already in the fold, but it was Rudolph starting the preseason game on Saturday against the Kansas City Chiefs, and a lot of people were talking about his steady play after the 17-7 win.

Of course while Rudolph was getting everyone excited, people likely would still be fretting if Ben Roethlisberger went down with an injury like in the past, and using a pointsbet promo code you can see the odds when Ben changes dramatically without the two-time Super Bowl winning quarterback.

Rudolph on Saturday night went 10-for-15 for 77 yards, and didn’t throw a touchdown or interception in the eventual 10-point win.

“When you’re going one against one (first-team offense against first-team defense), that’s always exciting to do,” Rudolph acknowledged late Saturday night at Heinz Field via Steelers.com. “Obviously, I had only done that once against Green Bay last year (Aug. 16, 2018). So it was a new set of faces and numbers and some good players out there.

“It matters, but as long as we control what we can control on offense they can have whoever they want on defense, and as long as we execute we’ll move the ball.”

Rudolph will get more chances over the last two games on the road, as likely the team won’t play Roethlisberger much at all, as they want to make their their star thrower does not get hurt in a game that won’t even count in the standings.

The team and Ben will have more than enough time in the regular season to make things happen, and it’s smart that the coaching staff is using this time to look at the backup quarterback job, as there is not a lot of time when the season really gets rolling to see who the better quarterback is.

For now, credit Rudolph for doing his job, getting himself ready, and making this preseason one of interest so far.

“Good to get in there with a new group, with Moncrief and (wide receiver) JuJu (Smith-Schuster) and (running back) James (Conner) and some of the O-line, the starter guys (tackle Alejandro Villanueva and guard Ramon Foster),” Rudolph said. “It was fun, a new group to jell with.

“Every opportunity you get I try to make the most of it. I thought we did (Saturday night).