Report: Conner and Smith-Schuster Out Again Against the Cardinals 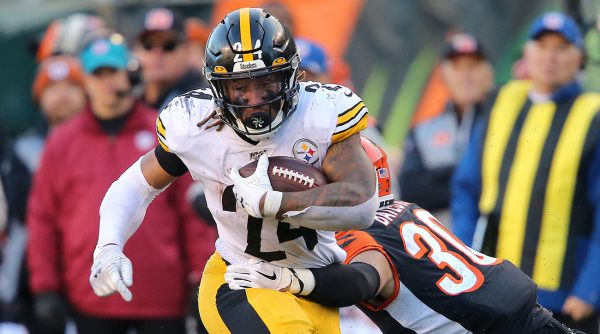 The Steelers have won two straight without running back James Conner and wide out JuJu Smith-Schuster, and it appears that they will have to head to the desert to play the Cardinals again without two of their biggest offensive weapons.

A report says that both Conner and Smith-Schuster won’t play Sunday against Arizona, as Conner is still unable to practice with contact, and Smith-Schuster has yet to do much else but run due to a knee injury suffered against Cleveland three weeks back.

With Conner out yet again, the bulk of the carries in the Steelers backfield will go to rookie Benny Snell Jr., who was impressive last week in the 20-13 win over the Browns, scoring his first NFL touchdown.

While Snell has been solid in the last two games, it would be nice to have Conner back in the lineup, but when that might be, if at all in 2019, is anyone’s guess.

“I just wasn’t ready to come back. I tried to fight through it,” Conner said Thursday.

The running back is referring to playing in that Thursday night loss in Cleveland in which he simply didn’t look like his normal self.

He left the game after five carries, re-injuring the shoulder that he first hurt in a home win on October 28th against the Dolphins.

That night was the best of the season for Conner, as he ran for 145 yards, and right now that looks like it could be the best we’ll see in 2019 from the third-year running back.

So it’s back to Snell, who the last two weeks has looked good, rushing for 161 yards on 37 carries.

With Smith-Schuster out, James Washington and rookie Dionte Johnson have been getting a number of chances in the passing game.

Washington last week helped jump start the offense, catching four passes, one of which went for a score that tied the game at 10 late in the second quarter.

Hodges to Remain at QB for the Steelers, JuJu and Conner Playing Sunday Questionable
Steelers vs Cardinals NFL Week 14 Inactives