Hodges to Remain at QB for the Steelers, JuJu and Conner Playing Sunday Questionable 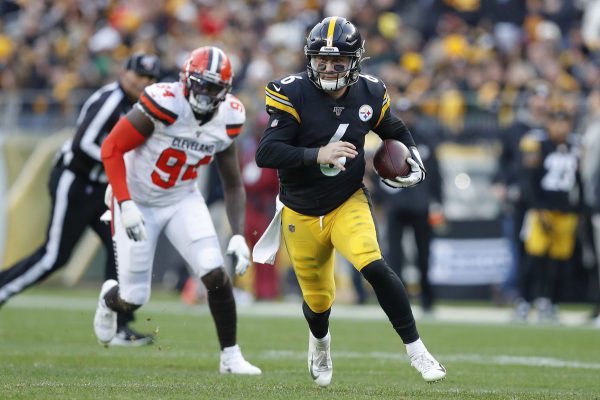 As if the Steelers really had any other option, they are staying with the ‘Duck’ for Sunday’s game in Arizona against the Cardinals.

Mike Tomlin announced today that Delvin ‘Duck’ Hodges is staying at the quarterback spot, a position where in two starts he’s led the team to a pair of wins over the Chargers and Browns.

“Going on the road is something we respect, especially when you’re working with a young QB,” Tomlin said Tuesday via ESPN.

“Duck will continue to be our quarterback again this week. He’s performed well in hostile environments, but he just doesn’t have a big sample size.

“Like what I saw in L.A. I liked what I saw in the second half in Cincinnati, but he’ll be moving now into roughly his seventh quarter of road work. We respect it, we’ve got to prepare that way in preparation for our offensive unit.”

Hodges and the team got off to a slow start in their huge game at home Sunday against the Browns, falling behind 10-0 in the second quarter, but by half the game was tied, and the Steelers ran off 20 straight points to hold on to a 20-13 win.

Hodges threw for 212 yards and a score to James Washington with a pick in the win over the Browns.

While Hodges was an easy choice, there’s also news on two of the biggest offensive weapons for the team, as Tomlin gave an update on running back James Conner and wide out JuJu Smith-Schuster.

Tomlin said both will have to work in practice this week to be able to play against the Cardinals.

“They have some work in front of them in terms of rehabilitation and maybe practice participation,” Tomlin said, via Jacob Klinger of PennLive.com. “We’ll see where all of that leads.

“I really just don’t have an indication of what that might be as I sit here today.”