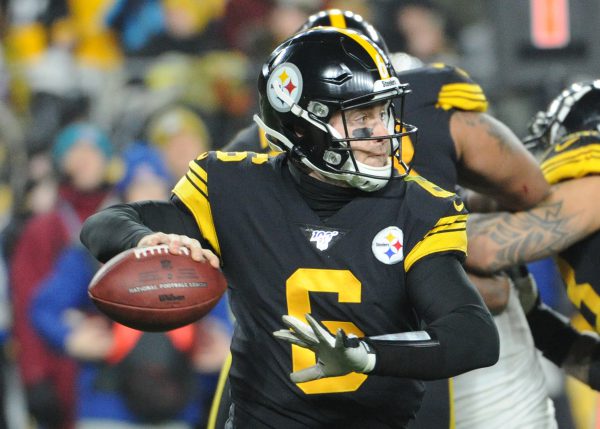 Steelers quarterback Devlin Hodges was benched Sunday, but he returned after quarterback Mason Rudolph was injured in their loss to the Jets. Hodges says getting benched hasn’t shaken his confidence, Joe Rutter of the Pittsburgh Tribune-Review reports.

“It’s definitely tough,” Hodges said Wednesday before the Steelers held their first practice of the week heading into the season finale Sunday at Baltimore. “Coach told me I did a good job of staying in the game. Once I got benched, I was back into the position of being one play away, and I ended up having to go back out there and give us a chance to win.

“It’s tough, but you have to be a team player.”

For the third time this season – and second because of injury – Hodges had to step in for Mason Rudolph. After Rudolph helped pull the Steelers into a 10-10 tie with the Jets, he was knocked from the game with a left shoulder injury that landed him on injured reserve. Hodges was unable to lead the offense to any points when he returned in the fourth quarter.

Because of Rudolph’s status, Hodges will start against the Ravens by default.

“It’s definitely not something I want to see happen,” Hodges said about Rudolph’s injury. “I hate when anybody gets hurt, and it tough, but he’s been around today, he’s been in good spirits and it’s good to see him still positive.”

Hodges also is positive he can shake the offense from its recent slumber of eight touchdowns in the past seven games.

“I’ve been watching some film, understanding what I can work on, what I can get better at,” he said. “Really, it’s helping me progress and get better, and I’m excited to get back out there.”

Hodges has lost back-to-back starts after becoming the first undrafted player to win his first three NFL starts in a non-strike season in the Super Bowl era. Hodges has thrown six interceptions in his past two games to go with seven sacks and a 41.7 passer rating.

“Maybe I was trying to force a ball a little bit instead of what they’re giving me,” Hodges said. “I have to take a step back a little bit and go back to how I was playing those first couple games and taking what the defense gives me.

“I’ve got all the confidence in the world in myself and my guys. Now, we just have to go out and do it.”