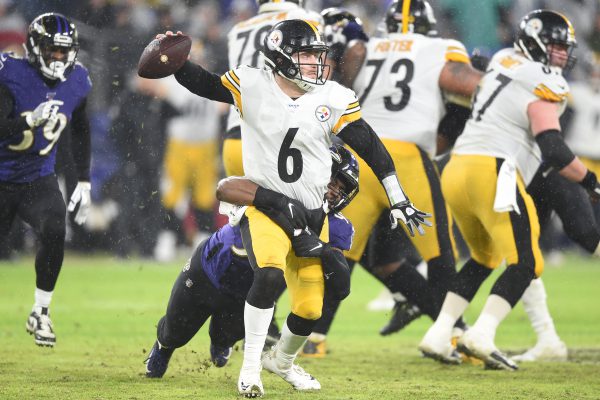 The Pittsburgh Steelers 2019 season came to an end early Sunday evening in the home of their biggest rivals, the Baltimore Ravens, who are also the favorites to win the Super Bowl in February.

If you have been checking the lines on the Steelers all season, you know that it’s been a roller coaster for the black and gold. Steelers fans have been looking at the Draftkings sportsbook offers here and you can do the same. DraftKings Sportsbook became the first full-service online and mobile sports wagering platform to launch in the legal New Jersey market, so check that out.

One week they looked like AFC contenders, and the next week, a team that simply from an offensive perspective couldn’t match up with some of the better teams in the league.

In the Steelers final three games, all losses which cost them a wild card spot, they were outscored 61-30. The losses came to the Bills at home, then to the Jets and Ravens on the road.

A win Sunday really would not have mattered, as the Tennessee Titans pounded the Houston Texans’ backups in Houston, thus earning the 6th and final spot in the AFC playoffs.

The Steelers have a ton of decisions to make well before the 2020 season kicks off in September, and as always there’s going to be some fresh faces wearing a Steelers uniform, and others that will be putting on another teams threads for the first time.

The two biggest decisions will come on the defensive side of the ball, as the club will have its two biggest free agents coming from that position.

Bud Dupree, who had a breakout season is free to ink anywhere he wants, and Javon Hargrave is another player who could be gone as well, as he’s in his prime and a number of teams would love to add him.

When it comes to Dupree, who had 10.5 sacks this past season, they have a couple of options, most of which are not all that favorable.

They can apply either a franchise or transition tag, ink the outside linebacker to a new long term deal, or let him walk, which will hurt the pairing the Steelers had this year with Dupree and T.J. Watt, who might be the NFL Defensive Player of the Year.

ESPN says that a franchise tag on an outside linebacker this offseason could run a large $16.2 million, a number that will put a stranglehold on the Steelers in terms of being fiscally sound for their salary cap.

“You always want to finish what you start,” Dupree said Sunday in Baltimore.

Likely one move coming is the team letting offensive guard Ramon Foster walk, which will save them $4 million off their cap.

Foster is on the downside of his career, and while he still has value, the team is going to need that money more than needing Foster, who can be replaced.

It was a tough way to end 2019, and the last three weeks have been tough to swallow.

The good news – the sheriff is on his way back, as Ben Roethlisberger should be healthy and ready to go come the start of training camp.

That ought to make the hard to swallow ending of 2019 a little easier to take. This team always seems to find a way to fill their holes and make the roster competitive before the start of camp.

It’s another task they have to do before the start of next season, but with the history of the front office, the team should be in good shape as the 2020 season kicks off.

Video: Steelers Fall to the Jets 16-10 as Playoff Hopes Take a Hit
Could TE Vance McDonald Be on the Chopping Block for the Steelers This Offseason?