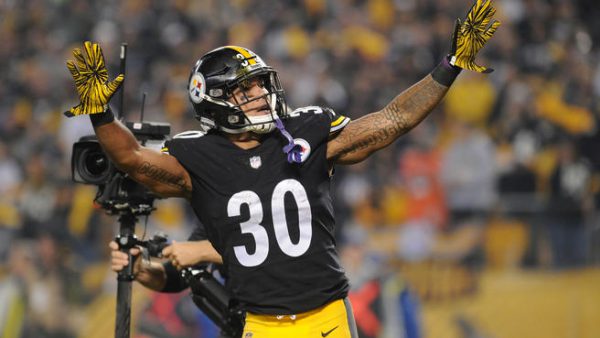 Steelers running back James Conner is scheduled to be a free agent after this season and says it “would be hard” to play for another team because of how connected he is to the city of Pittsburgh, ESPN reports.

“It would be hard, it would be hard to put another helmet on. Just because of everything and what this city means to me,” Conner said on The Adam Schefter Podcast. “The city I played my college ball in, the city I had my life saved in, became healthy. The city I got drafted to, and I want to be able to say the city I brought a championship to.

“It would be hard. I’m Pittsburgh through and through. But like I said, I’m big on my faith, so I’m always going to end up doing and being where I’m supposed to be at through the Lord’s guidance and direction. We’ll see. We’ll take it one day at a time; I’m staying in the moment.”

Steelers 2020 NFL Schedule Announced, Opener on MNF Against Giants
Wide Out Diontae Johnson Ready to Be a Star for the Steelers in 2020