Eight Memorable Steelers Wins Over the Bengals Since 2000 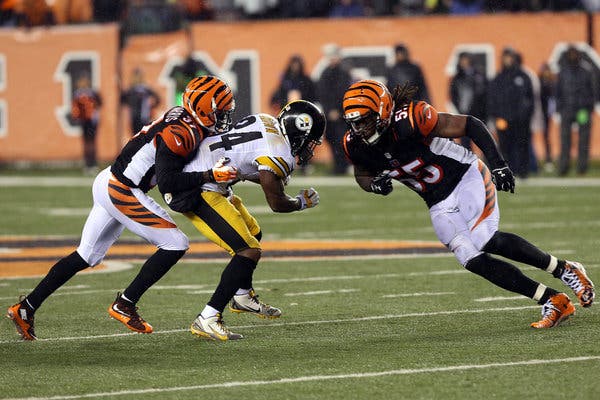 It’s not the same type of rivalry as the Steelers have with the Ravens, but the Bengals seem to draw the ire of Steeler Nation about as much as any team out there.

The two clubs, rivals in the old AFC Central and now the AFC North, have met a total of 101 times, with the Steelers owning the lead in the matchups winning 66 times with 35 losses.

Today we go back in time and remember some of the memorable Steelers wins, giving you eight games that are the most “memorable” won by the black and gold.

After a tough start to the season, it was the Steelers Monday night coming out party, as they beat up Andy Dalton one last time, beating the Bengals at home 27-3. They outgained Cincy 326-175, but maybe more impressive was new starter Mason Rudolph, who went 24-for-28 for 229 yards and two TD’s. The win was the first in 2019 for the Steelers.

In just about the only memorable game that running back Duce Staley had for the Steelers, the black and gold took care of business over Cincy 28-17. Staley raced for 123 yards on 24 carries with a score in the win. Ben Roethlisberger played well in his first ever start versus the Bengals, going 17-for-25 for 174 yards and a score. Troy Polamalu put the game away, picking off USC teammate Carson Palmer and running him over for a TD late in the win.

In a wild offensive affair in Cincy, the Steelers amassed 543 yards in putting up 42 points in a runaway win over the Bengals. A.J. Green pulled in an 81-yard TD on the last play of the third quarter to put Cincy up 21-17, but the Steelers rebounded, outscoring Cincy 25-0 in the final 15 minutes. The knockout was a Ben to Martavis Bryant 94-yard TD to make it 35-21. It was a statement win that put the Steelers at 8-5, dropping Cincy to 8-4-1.

The first ever regular season game at Heinz Field, Jerome Bettis ran for 153 yards on 23 carries, going over 10,000 yards in his career in a nine-point win. The 9/11 tragedy halted what was supposed to be the Steelers opener, making this the first game at the new stadium. Kordell Stewart threw for 151 yards, and the defense held Cincy to just seven points.

The Steelers offense and defense had big days, as they outgained Cincy 420-179 in a 15-point win. Chris Boswell kicked five field goals as the offense did whatever they wanted against the Bengals defense. The game can be recalled for a Le’Veon Bell stiff arm on a catch and run. Bell ran 35 times for 134 yards in the win.

The first playoff game ever between the two squads saw the Steelers pull out a two touchdown win. Trailing early 10-0, the offense got things going, and by half trailed 17-14. Carson Palmer was knocked out early, and Jon Kita was picked on in the second half, and the Steelers ran away with the win outscoring the Bengals 17-0 in the second half. Roethlisberger was 14-for-19 for 208 yards and three scores in the first of three straight road playoff wins.

In what was Bill Cowher’s last game as Steelers coach, the team came back to beat the Bengals in overtime, knocking Cincy and Marvin Lewis out of the playoffs. The win came when Santonio Holmes pulled in a pass and raced 67 yards 1:33 into OT for the win. Cowher had kept his plans quiet, but it was somewhat obvious that he was leaving, going out on a high note of a win over one of his biggest rivals.

In a game that not many will ever forget, this one ran the gamut of emotions, from the Steelers building a 15-0 lead in the third quarter, to going down 16-15 when A.J. McCarron hit A.J. Green with a 25-yard TD with less than two minutes left.

Then after Landry Jones threw a pick after Ben Roethlisberger was hurt, the game seemed over. Yet it wasn’t. Jeremy Hill fumbled on a perfect strip by Ryan Shazier, and on came Big Ben to try and win the game.

He got the team a couple first downs, and looking to get the ball over the middle to Antonio Brown, the wide out was hit in the head by Vontaze Burfict, drawing a 15-yard penalty. Then in a wild argument, Bengals CB Adam Jones bumped an official, drawing another 15-yard flag.

With :14 left, Chris Boswell hit a 35-yard kick to win the game, a game that many said the Steelers stole, and even more said the Bengals simply gave away.