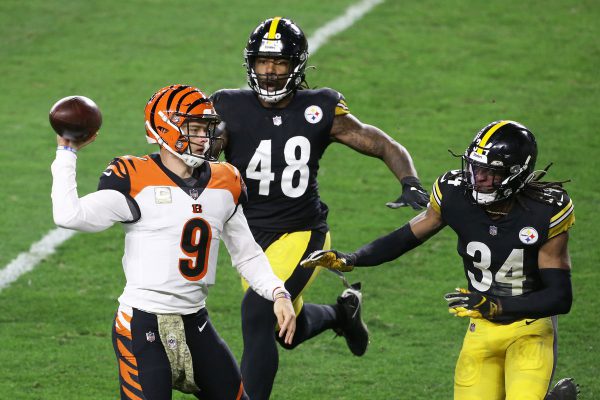 The Bengals started smack talk early in the week with a tweet showing off former wide out T. J. Houshmandzadeh wiping his feet with the Terrible Towel.

Sunday the Steelers let their play do the talking, wiping the field at Heinz Field with the Bengals in a dominating 36-10 win to move to 9-0 on the season.

It was a much needed win as the team’s defense spent the last two weeks on the field making a last stand to secure a win.

The offense was paced by a great effort by Ben Roethlisberger, who threw for 333 yards and four scores, and was excellent all night long.

Now with their sights set on 10-0 and a game in Jacksonville Sunday, here’s a few takeaways from Sunday’s runaway win.

The offense didn’t score on their opening drive, but after a fumbled punt recovered by the Steelers, the team did put points on the board with a Chris Boswell 41-yard field goal making it 3-0.

They pushed it to 6-0 after another Bengals turnover, and finally after a quick Bengals drive, the offense went 74 yards in just 3 plays, and Diontae Johnson pulled in Ben’s first TD to make it 13-0 after the first quarter.

It just felt that the offense could do whatever it wanted to, and the Bengals never really put a threat together to stop the Steelers offense.

There is going to be a lot of discussion again about the lack of rushing the football, as the Steelers ground game again struggled, putting up 44 yards total.

I completely understand long term this team needs to run the ball better, and more so in key short yardage situations, but Sunday their passing game was such where rushing the ball just was not all that important.

Now staring at a 1-8 Jaguars team that has nothing to play for but pride, the Steelers have another interesting test next week.

All week the story was how or could Bengals rookie QB Joe Burrow do enough to find a way to pull off an upset against the undefeated Steelers.

It was a complete dominating effort by the Steelers defense, to the point where Cincy was 0-for-13 on third downs, and other than garbage time the D made it a long day for Cincy’s offense.

If you’re adding that up, that’s nine punts, one TD, one field goal, three turnovers and the end of the game.

Seeing that as a Bengals fan – ouch.

Overall Burrow was 21-for-40 for just 213 yards and one touchdown. He’s going to be great if he can stay healthy and the Bengals can build around him.

Sunday it was his turn to get an education, and boy did he get one from the #1 defense in the NFL.

3. Will Being Undefeated Get to This Team?

It’s another week of looking at not having an “L” for the Steelers, but this was a win that finally should answer questions that not every game is going to come down to the final play or series.

The same should happen next week on the road in Jacksonville against a one-win Jags team, but if there’s one place the Steelers haven’t exactly played great football over the years it’s down in Florida against Jacksonville.

With that, Mike Tomlin has kept this team super focused despite all the media attention that builds week after week, and this team can’t afford to look ahead to their Thanksgiving showdown with the Ravens, but Tomlin won’t allow it.

That’s not to say beating the Jags is a given, but they are not a good football team, and might be the weakest team they’ve played in 2020.

The media will build up the undefeated mark more so than the team, and the two leaders of this organization have to keep this team on track – that being Tomlin and Roethlisberger.

Let’s hope the Ravens slip up either against the Pats or Titans at home next week, but if not, the Steelers can lay a knockout blow against them on Thanksgiving.

Before that, they have to get there with a win in Jacksonville.

Eight Memorable Steelers Wins Over the Bengals Since 2000
Day After Thoughts: The Run Game, Jaguars Week, Give Ben a Break?