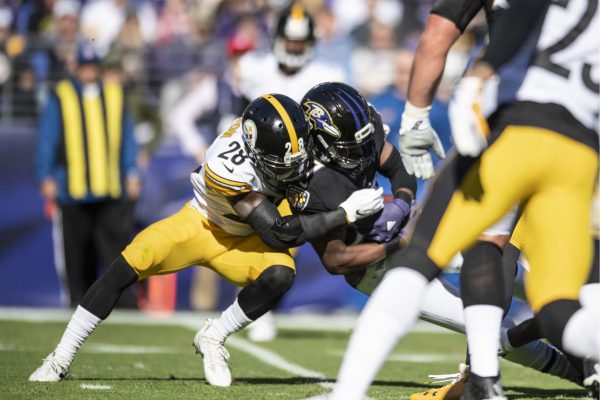 Coming off another dominating win on Sunday, their second straight, the Steelers prepare for their biggest game of the season on a short week, as the team will play the Baltimore Ravens on Thanksgiving night at Heinz Field.

A win by the Steelers not only puts them at 11-0, but more so all but knocks the Ravens out of the running for the AFC North title, and really hurts their playoff chances.

The Ravens have dropped two of their last three, losing to the Steelers three weeks back, the Patriots on Sunday night a week ago, and then Sunday they lost in overtime at home to the Titans on a Derrick Henry 29-yard touchdown run in overtime.

At 6-4 the Ravens are currently the 8th seed in the AFC, and dropping them to 6-5 would put a huge dent in their hopes of making an impact in the playoffs.

Right now the Steelers are a light three-point favorite in the Thursday contest, which is somewhat of a shock considering you have a 10-0 Steelers team that the last two weeks has outscored the opposition 63-13.

It likely shows how competitive this series between the two teams is, and no matter the circumstances or the record you can almost just throw them out the window.

2. McDonald Set to Return This Week

After missing the last two games due to being on the reserve/COVID-19 list, tight end Vance McDonald will be back for Thursday’s game against the Ravens.

Today Mike Tomlin said that McDonald will be activated from the list, and should be back with the team Tuesday, and he can practice Wednesday in what will be the only real prep for Baltimore.

Fellow tight end Eric Ebron has been gaining a bigger role in the Steelers offense, and he caught another score in Sunday’s win over the Jags. Ebron has 35 catches for 359 yards and four scores.

McDonald in eight games had nine catches for 61 yards.

3. Still Hanging on to the Bye

The Steelers win Sunday keeps them in line to have the only AFC bye if the playoffs started today.

The team nearly got some much-needed help Sunday night as for the second time in 2020 the Raiders nearly beat the Steelers biggest foe this season in the AFC, that being the Super Bowl champion Chiefs.

Instead, Las Vegas gave Pat Mahomes just a little too much time, and in the end forgot to cover tight end Travis Kelce and he scored a wide open touchdown in the final 30 seconds for a 35-31 win.

Kansas City still has a couple tough games on their schedule, as they play at Tampa this Sunday, at Miami on December 13th, and at New Orleans on December 20h.

It would be nice to get the Chiefs at two losses to ensure that the Steelers have at least a little breathing room for that bye.

It also makes Thursday’s game against Baltimore just that much more important as a loss quickly tightens up the division with Cleveland at 7-3, and the AFC would have both the Chiefs and Steelers with one loss apiece.

Steelers Dominate Jaguars 27-3; Roll to 10-0 with Ravens Thanksgiving Game Next
Ravens to Be Minus Two Key RB’s in Thursday’s Game Against Steelers