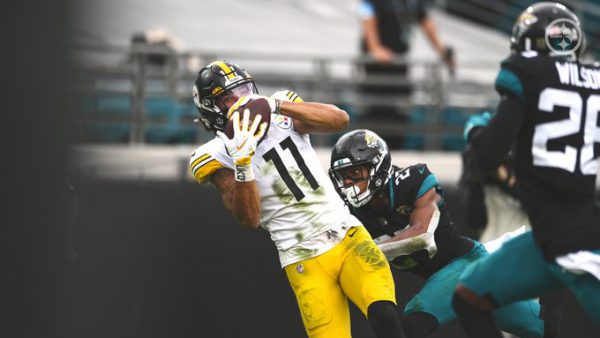 So much for a trip to Jacksonville being a “trap game.”

The Steelers didn’t make it all that easy on themselves playing a one-win team, but they did more then enough with a dominating defensive performance, and put away with relative ease the Jacksonville Jaguars 27-3 to move to 10-0 on the season.

The defense made it a long day for Jags quarterback Jake Luton, as they sacked him twice, and intercepted four of his passes, with two each for safety Minkah Fitzpatrick and safety Terrell Edmunds.

The offense was more balanced than it had been, as Quarterback Ben Roethlisberger threw for 267 yards and two touchdowns, and running back James Conner had 89 rushing yards and a rushing touchdown on 13 carries.

Here’s a couple takeaways from the win as the club now has a short week before they welcome in Lamar Jackson and the Ravens on Thanksgiving night.

The Steelers defense looked shaky in the Jaguars first drive, as thanks to a couple nice throws and runs, Jacksonville was able to get down the field and eventually kick a field goal.

Little did we all know after those three points the Jags would not score again, and even when they did challenge, they would get turned away thanks to a big play or turnover.

The Steelers defense as a while held Jacksonville to 206 yards, and rookie running back James Robinson broke off a couple nice runs, but as a whole was held in check, going for 73 yards on 17 carries.

Two sacks and four turnovers will win you a lot of games, and with the offense finally getting going in the second quarter, it was evident a victory was headed the Steelers way in Florida.

2. Cranking Up the Run Game

Much like the game itself, it wasn’t pretty, but the Steelers run game got things moving on Sunday as it seemed that the coaching staff had it in their heads that no matter how ugly it would be, they were going to run the football.

As a whole, the black and gold averaged 3.9 yards per carry, going for 106 yards on 27 carries. After a long week of hearing “what is wrong with the run game,” the club went with James Conner as the featured back again, and he came through as the game’s leading rusher, going for 89 yards on 13 carries.

Conner Sunday put up 6.8 yards per carry, and just seemed to run with more resolve than we’ve seen in the last few weeks.

Benny Snell had seven carries, Ray-Ray McCloud had a carry, and Anthony McFarland Jr. had three carries in the win.

Against the Ravens Thursday it’s going to be critical that the team runs the ball and does it well.

3. Nail in the Coffin

If you hung around after the game the Titans did the Steelers a big favor on the road, beating the Ravens in overtime on a Derrick Henry touchdown to drop Baltimore to 6-4 on the season, and they have no lost three of their last four.

Even better they actually drop to third in the AFC North as with a home win over the Eagles 22-17 the Browns take over second place at 7-3.

If the Steelers can pull out a win on Thursday over the Ravens, it will basically clinch the AFC North, the first step to a Super Bowl run for the black and gold.

A win would put the Steelers at 11-0, dropping the Ravens to 6-5 with five games left. Yes the Browns wouldn’t be dead just yet, but let’s be serious, the Steelers might as well print up the 2020 AFC North Champion hats and shirts as the division title is as good as theirs if they can stop Lamar Jackson and company.

Steelers Lay an Old Fashioned Beat Down on Burrow and the Bengals in 36-10 Win to Move to 9-0
Day After Thoughts: Steelers Early Favorites Over the Ravens, TE McDonald Set to Return This Week