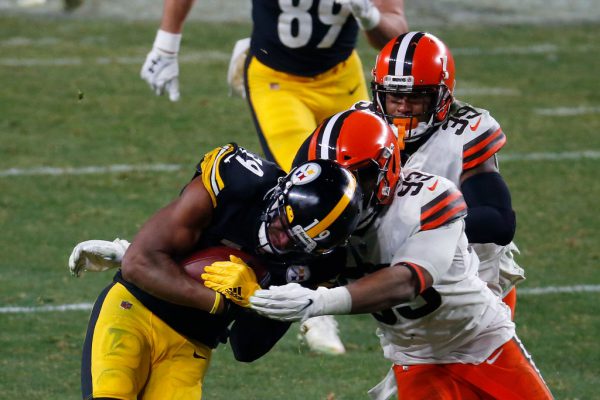 Many Steelers players sat on benches after their stunning 48-37 home loss Sunday night to the Cleveland Browns at Heinz Field.

Among them was wide out JuJu Smith-Schuster, who looked like a deer in headlights as he watched the final seconds tick away on what now will be looked at as a failure of a season.

Smith-Schuster got under the skin of the Browns this past week when he made some comments about Cleveland simply being the “same old Browns we play every year.”

The wide out had a solid game catching the ball, but obviously the Steelers didn’t do much but throw after they fell behind 28-0 and 35-10 at half.

Smith-Schuster, who may have played his final game in Pittsburgh Sunday night, was still as brash as ever after the game, going as far as saying he does not regret the comments from last week which seemed to tick the Browns off.

“I don’t regret saying what I said. They came out … today wasn’t our night,” Smith-Schuster said according to Brooke Pryor of ESPN.

“Hopefully, the same Browns show up against the next opponent and do what they did tonight and have a great game.”

The Steelers did just about everything they could to make it easy on the Browns, giving them five turnovers and gifting them a score on the game’s first play when the ball was snapped over the head of quarterback Ben Roethlisberger.

“It was, ‘What more bad things can happen to us?’ It was, ‘We’ve got to make a play,’” Smith-Schuster said of his first-half mindset.

“(Quarterback) Ben (Roethlisberger) was calling plays to make it happen … we couldn’t make it happen. Our guys did not quit. We fought to the end of the whistle. We played our ass off.”

The team may have not quit, but they clearly appeared to have their minds in a different place, and maybe now that it’s all said and done, the team will need to address the antics of Smith-Schuster should he return in 2021.

Steelers Embarrassed Right Out of the Playoffs, Spot Cleveland a 28-0 Lead in Eventual 48-37 Loss
Kevin Colbert Reportedly Close to Leaving the Steelers For Lions