100 Things Every Steelers Fan Should Know Before They Die: Beating the Ravens Three Times in the 08 Season 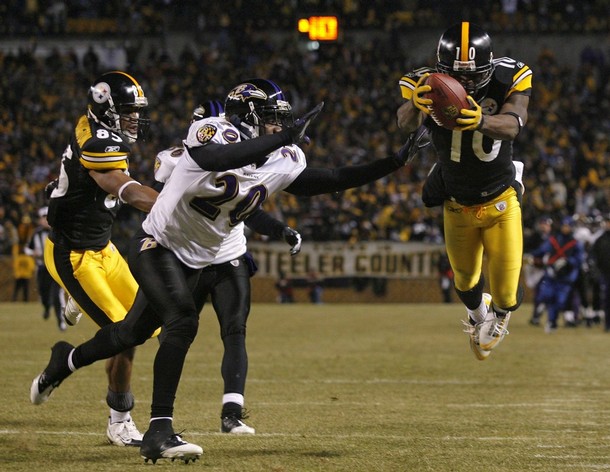 In the summer of 2010, my first book will be coming out in stores entitled “100 Things Every Steelers Fan Should Know Before They Die.” The book, which is being published by Triumph Books, will be in stores next Summer and will retail for $14.95. We will have ordering info through Amazon as soon as it becomes available.

In the meantime, through the offseason and even before it, we’ll give Steelers Gab readers a sneak peek of some chapters of the book. Today is chapter 76, which is a summary of the teams three wins over the Ravens last season as the team reached Super Bowl XLIII. Enjoy!

Physical. That’s about the only way you can describe the rivalry between the Pittsburgh Steelers and the Baltimore Ravens. In 2008, that rivalry took on a whole new meaning when the teams met three times for just the second time ever, with the conference’s biggest prize at stake in their third and final meeting.

These two teams simply do not like each other very much. Sure, there’s a level of respect, but as Mike Tomlin says it – it doesn’t mean it gives you a warm fuzzy feeling about one another. For the 2008 season, there was not many good feelings about any player on either side.

The first meeting at Heniz Field came in week four on a Monday night, September 29th. The Steelers were coming off their first loss of the year, a 15-6 setback in Philadelphia which saw QB Ben Roethlisberger suffer 8 sacks, and 9 overall when you add the one that backup Byron Leftwich suffered. They came into Monday night somewhat beat up.

The Ravens were an upstart unit, going 2-0 with a bye in the first three weeks of the season. They had a new coach in John Harbaugh, and a rookie QB in Joe Flacco. They came out the more aggressive unit in that first meeting, building a 13-3 lead at the half. As the Steelers left the field, they were not a happy bunch. They failed to get to Flacco much, and on offense they were struggling to say the least.

The Steelers locker room was an interesting place to be at halftime, as Roethlisberger took the lead, telling his offensive unit that were embarrassing themselves, and it showed in being booed off their home field. It lit a fire, as in the third quarter they went to a hurry up style on offense, and it paid off as Roethlisberger hit wide out Santonio Holmes for a 38-yard score to make it 13-10.

It took the team a whopping :15 seconds to take the lead, as a James Harrison hit on Flacco popped the ball out, and LaMarr Woodley picked it up and went 7 yards for a score to make it 17-13 Steelers. The game went back and forth to the end, as after a late Ravens score with 4:02 left tied the game at 20, the two rivals went to OT.

The Steelers had already been without running back Willie Parker, and rookie back Rashard Mendenhall had busted his shoulder early in the third quarter on a hit by Ray Lewis. That left third down back Mewelde Moore to carry the load. Moore did just that, hauling in a short pass over the middle from Roethlisberger and going 24 yards to the Ravens 31 on a 3rd-and-8. It set up win number one, as Jeff Reed hit a 46-yard field goal to give the team a 23-20 win.

Eleven weeks later the stage was set for the rematch in Baltimore, this time with a lot more on a line. A win by the Steelers and they would clinch the AFC North, and a first-round bye. A loss, and the Ravens would pull the teams even, as the Ravens were 9-4 and the Steelers 10-3. Again, it would be a memorable battle that left fans wanting more.

It would be a battle between the number one and number two defenses in football, and it played out as expected. Only one touchdown was scored, and even that didn’t come without a cloud of controversy. The game saw the Ravens lead 9-6 with the Steelers backed up to their 8-yard line with 3:36 left. Leave it to Roethlisberger, who pulled out big plays all season, as he led them down the field, hitting pass after pass, avoiding the Ravens rush.

The big play was a 24-yard pitch and catch from Roethlisberger to Nate Washington, who took it to the Ravens 14. He then hit Hines Ward for 10 yards to the Ravens four. Three plays later, the QB who is known for making things happen when nothing should, rolled to right, and threw a shot to the end zone, where Holmes was standing just inside the goal line.

The first ruling was that even though Holmes feet were in the end zone, he was down at the one-yard line. Then, after a long look at in the replay booth, the refs ruled that the ball broke the plane, and that it was a Steelers touchdown, giving them a 13-9 lead following the extra point with :43 seconds left.

One William Gay interception later on a desperation pass from Flacco and the Steelers were North division champs, and not only that they had secured the all important first round bye in the AFC.

Wouldn’t you know that the two teams had one more go around, this time with even more on the line. After a win by the Steelers over San Diego in the Divisional round, and the day before that a Ravens upset over the Titans in Tennessee set up a third and final meeting, with a trip to Super Bowl XLIII on the line.

The January 18th battle at Heinz Field took place late in the evening, and the temps were in the teens, setting up a battle for survival. “Probably the most physical game in the history of football.” That’s what Troy Polamalu said about the AFC Championship game when describing it to NFL Films during the Steelers Super Bowl edition of ‘America’s Game.”

Again, it was going to be whoever played more physical, and on this day, it was again the Steelers. The black and gold dominated early, building a lead with two Reed field goals and then the big play of the game took place. Roethlisberger, again scrambling, threw long for Holmes, who made a catch in the middle of the field, then raced the final 47 yards for a score to make it 13-0 about a minute into the second quarter.

The Ravens though did not go quietly. They battled back and by the time the Ravens scored with 9:29 left, the Steelers once 13-point lead was down to two at 16-14. Baltimore was able to stop the Steelers on their next possession, and then got the ball at their own 14 with 6:50 left. They got a first down, but then were hit with a huge 3rd-and-13 from their own 29.

Flacco went back to pass, and looking for Derrick Mason was hit by Harrison, and the ball somewhat sailed. Polamalu made the stabbing pick, and then did what he always does, cut back. By the time he was done, he was pointing up to the stands to his young son as he ran though the end zone. The score made it 23-14, and ended the Ravens final threat.

The win cemented not only the Steelers trip to their 7th title game, but also made it official that the Steelers-Ravens battles forever would go down as some of the hardest hitting in NFL history.

100 Things Every Steelers Fan Should Know Before They Die: Steel Curtain