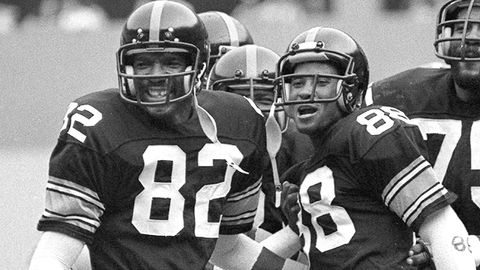 This summer, my first dedicated to the Black and Gold book will be coming out in stores entitled “100 Things Every Steelers Fan Should Know Before They Die.” The book, which is being published by Triumph Books, will be in stores and will retail for $14.95. We will have ordering info through Amazon as soon as it becomes available.

In the meantime, through the offseason, we’ll give Steelers Gab readers a sneak peek of some chapters of the book. With the draft this week, today is chapter 11, which talks about the greatest draft class in the history of the NFL – the Steelers draft class of 1974. Enjoy!

When it comes to the draft, the Steelers to this day still have what is considered to be the greatest draft class of the history of the league, this coming in 1974. It was five years into the Chuck Noll coaching regime, and the Steelers had slowly started to build a championship dynasty. Noll had already added a few players that would go on to be legends – among them included Joe Greene, Terry Bradshaw and Franco Harris. But no one, not even Noll, could have expected the success that the 74 draft brought them.

The team had success in the 1973 season, going 10-4 in the regular season, but were dispatched rather easily by the Oakland Raiders in the playoffs 33-14. The team needed just a few more pieces, and in that famous 74 draft, they got that and a whole lot more.

With the team holding the 21st pick, they went with a playmaking wide receiver in the first round, taking Lynn Swann from USC. They wanted a player that Bradshaw could develop a 1-2 punch with, as the following season little known Ron Shanklin was the teams leading pass catcher with 30 catches for 711 yards, though he did have 10 scores.

Over Swann’s career, he was a Super Bowl MVP, and put together some of the most memorable catches in NFL history. Needless to say, the pick was a success. He also played hurt, as was shown after he took a vicious hit in the 1975 AFC Title game against the Raiders. He came back, concussion and all, to have a huge game against Dallas to take home the MVP in the Super Bowl X win 21-17.

Round two saw the team get an undersized linebacker with attitude from Kent State by the same of Jack Lambert. As a rookie, Lambert was just 204 pounds, but he used his heart and desire to be the best to become in some experts eyes the best middle linebacker in NFL history. He had quick feet, and always seemed to be in the right place at the right time.

Lambert was the NFL Defensive Rookie of the Year, and helped the team win Super Bowl IX with a dominating defensive outing topping the Vikings 16-6. Better known as “Count Dracula in Cleats,” after he lost his four upper teeth in high school taking an elbow, Lambert was a menace to running backs and quarterbacks. He went on to win four Super Bowls, go to nine straight Pro Bowls, and was the 1976 NFL Defensive Player of the year. He went into the Hall of Fame in 1990.

The following round saw Noll and the club take Alabama A&M wide receiver John Stallworth. Another Hall of Famer, Stallworth and Swann combined to be an incredible 1-2 punch at wide receiver for the Steelers for their Super Bowl years. Stallworth was not as flashy as Swann, but he set franchise records at the time with 537 grabs for 8,723 yards and 63 touchdowns. He played in four Pro Bowls, and was a two-time team MVP. He went into the Hall of Fame in 2002.

The only player that never gets a lot of attention from that Steelers draft was their fourth round pick – UCLA cornerback Jimmy Allen. The 100th overall pick did play on two Super Bowl teams, and did even hold Raiders WR Cliff Branch to just one catch in three critical possessions in the 1974 AFC Title game in Oakland. He was a contributor on special teams, making two tackles in Super Bowl IX vs. Minnesota. Allen stuck around until he was traded to the Lions before the 1979 season.

The fifth and final Hall of Famer from the 1974 draft was the teams fifth round pick, center Mike Webster. “Iron” Mike was the anchor of the Steelers offensive line from 1976 to 1988. He played in 150 straight games, and was a seven time All-Pro and played in 9 Pro Bowls. He started his career learning from Ray Mansfield, and ended it teaching Dermontti Dawson. He was a great influence, and was a great friend on and off the field with his quarterback, Terry Bradshaw.

Webster was the last active player in the NFL to play on all four Steelers Super Bowl teams. The jersey he wore – #52, never has been reissued by the team, showing the respect they had for their late center who passed away sadly in 2002, just six seasons after he was inducted in the Pro Football Hall of Fame.

“It’s nice to be lucky,” Noll said of that 74 draft. “You never know how it’s going to turn out, fortunately we got some guys who wanted to produce that year.”

You can say that again. Five players, four Hall of Famers, and four Super Bowl trophies later, no draft class in NFL History has even been held in such high regard. And for good reason.