100 Things Every Steelers Fan Should Know Before They Die: #27 – Tomlin Steps In; and the Winning Ways Continue 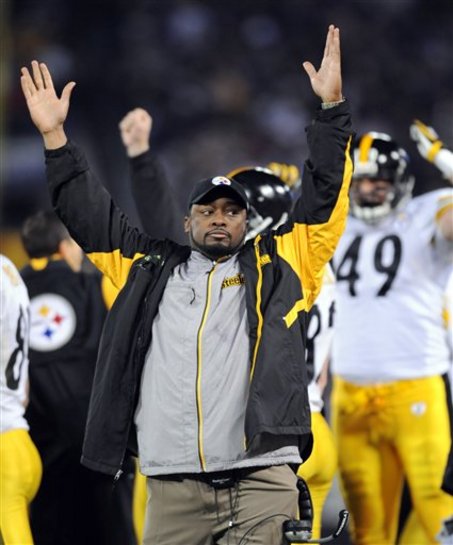 This summer, my first book dedicated to the Black and Gold book will be coming out in stores entitled “100 Things Every Steelers Fan Should Know Before They Die.” The book, which is being published by Triumph Books, will be available in all major book stores and will retail for $14.95. It is currently available for pre-order through Amazon and Borders, and is set to arrive in stores on September 1st.

Through the offseason, we’ll give Steelers Gab readers a sneak peek of some chapters of the book. Today we highlight one of the greatest running backs the team ever had, but rarely gets talked about – chapter 27. Tomlin Steps In; and the Winning Ways Continue

Much like Bill Cowher before him, Mike Tomlin’s job entering the 2007 season with the Steelers was not going to be an easy one. All Tomlin had to do was maintain the winning and championship runs that Cowher had done for most of his 15 seasons on the sidelines. So, like Cowher had to do when he took over for Hall of Fame coach Chuck Noll, Tomlin had to do the same in place of Cowher. It was not going to be easy, and for Tomlin, he wanted to do it his way.

Tomlin, a native of Newport News, Virginia, was a longshot at best to be the Steelers head coach when Cowher announced he was walking away after the teams 2006 season. All along everyone felt that the next coach of the Steelers would come from within the walls of the teams headquarters, as both offensive coordinator Ken Whisenhunt and offensive line/assistant coach Russ Grimm seemed ready and primed for a chance to be a head coach.

Once Dan Rooney and those inside the Steelers camp spoke to Tomlin, it was obvious it was not going to be long before he was the head coach of some franchise. He took the team by storm with his presence, and impressed the club so much that he ended up as in the final two along with Grimm for the head coaching spot. While the Steelers didn’t want to lose Grimm, in the end they went with Tomlin, making a statement that hiring from within isn’t always the best way to do things. A few years into Tomlin’s head coaching career, it’s obvious they made the right choice.

Coming in as a 34-year-old head coach for a club that was two years removed from hoisting a Super Bowl trophy is never easy. Tomlin did something that most first-time coaches never do – he kept many of the assistant coaches from the Cowher coaching era. The biggest talked about move was keeping defensive coordinator Dick LeBeau, which was a surprise to some considering Tomlin was of the school of the 4-3 defense while an assistant in Tampa Bay and Minnesota.

It took a lot for Tomlin to stay with the Steelers 3-4 defense, but by the 2008 season the move paid off as the club rode their 3-4 defense to a 6th Super Bowl title. Back to Tomlin’s first season, there was plenty of early growing pains, then he ran a physically and mentally draining first training camp, and even made some personal moves that were met by some with shaking heads, the biggest newsmaker being the release of long time popular linebacker Joey Porter.

His team though seemed ready to take the field for their first season with the new coach, and it didn’t take long for Tomlin’s first team to make an impact. The Steelers in 2007 started out 3-0, and then were 7-2 before some injuries and wear and tear began to catch up with them. The club was drained by December, and they lost three of their last four games, putting them as the number four seed in the AFC. They hosted a first-round playoff game against the Jacksonville Jaguars, and after falling behind 28-10, they had a spirited comeback, only to fall in the end 31-29 to end their season.

Tomlin did some things differently in 2008, tweaking this training camp schedule and making sure the players were a lot more fresh. They had the toughest schedule in recent NFL history, and they tore through it with a punishing defense and a quarterback in Ben Roethlisberger who was getting better and better. The coach pushed all the right buttons, motivating his team and making sure they stayed humble and focused the whole season.

The team went 12-4, and ended the regular season as the number two seed in the AFC, earning a first-round bye. They topped the Chargers after a slow start in the Divisional Playoff game 35-24, and then beat the Ravens 23-14 for the AFC Championship. It was the third time Tomlin’s team topped their arch-rivals. Then in a memorable Super Bowl, the club rallied after the defense allowed a late touchdown to Larry Fitzgerald, as Roethlisberger drove his team down the field for a score to pull out a 27-23 win.

Tomlin became the youngest head coach to win a Super Bowl, was the 2008 Motorola NFL Coach of the Year, and he set a Steelers record winning 22 games in his first two seasons. The 2009 season was again full of challenges, and Tomlin’s club again started strong, but this time just didn’t have enough to repeat as AFC North champions.

The team started 6-2, but a hard to swallow five-game losing streak ended most of their playoff dreams, as they ended the year 9-7 and out of the playoffs. Despite that, Tomlin has proven in three seasons that he has the coaching qualities to continue leading the Steelers for years to come, and it wouldn’t be a surprise to see more hardware in the Steel City under Tomlin’s rule.