A look at the Steelers Running Game 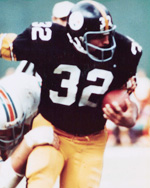 It’s not a surprise that Steeler Nation would like to see more from the running game – more productivity, smarter, get yardage when it matters – we’ve all said it. Especially after we watched Ben throw for 4,000 yards last year and we still didn’t win.

Then there were the calls for Arians job.

Sure, we’ve all thought it once or twice, or maybe more.

But I have a theory, hear me out…

As I read Chad Millman and Shawne Coyne’s book, “The Ones Who Hit the Hardest,” I became facinated with a couple chapters on Franco Harris.  Let’s start with the fact that Chuck Noll didn’t really want to draft him, but did and then didn’t know what to do with him.  In his rookie year at the first training camp, Harris couldn’t really do much of anything – no gaps to shoot, no holes to run through and Noll thought the team made a mistake.

Then in his first exhibition game, Harris starts to run the play that was called, realizes there’s no hole and cuts around the other side and flies down the field to scoresa 75-yard touchdown.  Obviously, the Steelers didn’t make a mistake and Franco Harris had an amazing career with the Steelers. The bottom line: Harris knew what was going on across the entire field, he had vision, he was athletic and could change direction when he needed to and it didn’t hurt that he was fast.  In addition, Noll built an offensive line with smaller and faster lineman than most of the NFL at the time.

According to the Millman and Coyne, Noll’s method of running the ball wasn’t to overpower a defensive line, it was to use  a defender’s nature against himself by executing trap blocks. In the trap the offensive lineman doesn’t initially block the defensive lineman across from him.  He just lets go, while another offensive lineman pulls from his position and blindsides the onrushing defender.

Obviously, this is what Steeler Nation would like to see happen.  But I wonder, do we still have the kind of offensive line that allows for a runner like Franco Harris? I think we have moved into putting those big huge guys up front and away from a faster, smaller line – and therefore, we can’t execute like we did during the days of the “Immaculate Reception.”

So, what would it take for Mendenhall to play like Franco? I don’t know. And we probably won’t know this year, but it’s something that Arians needs to consider. The Steelers would also have to consider how the offensive line is built and what they are tasked to do. Maybe, to protect the passing game they are just fine, but it all depends on how much the Steelers want to mix it up between passing and running the ball. I just don’t know.

What I do know is this: there are some NFL teams who get it and who the Steelers need to prepare for.

First on that list, and someone we’ll see twice this year, is Ray Rice and the Ravens.  He’s a quick running back and he sees the openings on the field as they happen.  Every time he gets the ball, I hold my breath and hope that somehow, our defense will shut him down.  Sometimes it works, sometimes it doesn’t.  Last year Rice rushed for 1,339 yards and had 7 touchdowns.

Another running back we’ll face twice, Cedric Benson, is also a top running back  and in his 6th season in the NFL currently with the Bengals.  Benson is coming off his best career performance rushing for 1,251 yards and 3 touchdowns.  He’s dangerous and fast on the field.  When the ball is in his hands you have to watch out.

That feeling is, I think, what Steeler Nation wants other teams to feel from our own running game, yet, I just don’t think the Steelers are built that way. Right now, anyway. Let’s hope that over the next few weeks (years?) we develop a run game like Franco had and move the ball when we need to.  The Steelers need to find that happy medium between run and pass.

What do you think?