Regular Season Game One vs Atlanta: Keys and Prediction 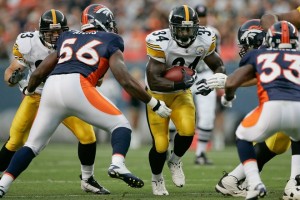 It’s finally upon us. The opener against the Falcons, which we all have been waiting for since the moment it was announced is here. Let’s take a look at the keys to the game for the Steelers, and our final prediction.

1. Run, Run, Run – The Steelers run game is critical to their success without Ben Roethlisberger, and here in week one it becomes key. Look for Rashard Mendenhall to get off to a good start, but also look for guys like Mewelde Moore and even Issac Redman to get some carries, and Dennis Dixon could also see 5-7 carries when the line breaks down. If they are going to win, the team needs to put up 125-175 on the ground.

2. Happy return for Troy – The Steelers D has missed their playmaking safety, but he’s finally back, and here’s hoping he adds that playmaking ability the team missed last season to the defense. With Polamalu back, the D should be closer to 2008 than 2009, and we all know how good the D was in 2008 when they were best in the league. Look for a big play for Polamalu.

3. Limit the Mistakes – Most of this falls of course on Dixon, but there are two areas the team needs to watch, and both have been issues in years past. One of course is the kick return game. The Steelers kick return department has been awful the past few years, and they worked hard to get better in that area. Also allowing the big plays from the Atlanta offense. Matt Ryan and Roddy White are a good 1-2 punch, and the Steelers can’t allow those two to hook up on a big play or two.

4. Set the Tempo – By controlling the tempo early, the club can show some dominance over a team they should be able to beat. They have to show they are better and more physical than the Falcons, and the two lines of scrimmage are keys there. The defense needs to hit someone early, and the O-line has to prove the naysayers wrong with opening holes.

Prediction – Well, I have said all along that it wouldn’t surprise me if the Falcons came into Heinz Field and stole one. Atlanta is a team that could easily find itself in the playoffs with 9-10 wins, as they have talent on both sides of the ball. On this day though, Dixon has something to prove, but more so the Steelers D wants to prove that last year was a fluke, and they will return to form starting Sunday.