Things I Think About Regarding the Jets 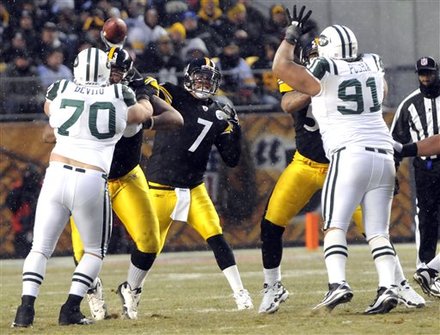 1. A Very Good Defense – The Steelers may have what many feel is the best defense in the league, but the Jets are not all that far behind. They did something Sunday many felt no team could do, and that is contain the Pats and more so Tom Brady. Take away the late TD that made the score more closer than it should have been, and the Jets dominated that game in New England from start to finish. Darrelle Revis is the best cover CB in the league, and up front their front four get pressure and do a good job on the run. From a positive standpoint for the Steelers, they did have 378 total yards, and if they would have scored on that last play, many more would be on the Steelers bandwagon today. With that though, the Steelers have to have a good gameplan for the Jets D Sunday night.

2. Holmes and Edwards – Would the Jets be where they are without the trade for Santonio Holmes? Probably not. He won the game in Cleveland in OT, and had a big play in the OT in Detroit, two games the team needed to be a wild card. Holmes is a game breaker, much the like of Mike Wallace. He can’t be overlooked, and the Steelers did a good job on him in the first game when he had 6 grabs for 40 yards. Edwards made a couple big plays in New England, and had a big grab at the end of the that Colts game as well. He had a bigger day the first time out, 8 grabs for 100 yards with a 38-yard catch. Mark Sanchez will look to these two often.

3. Sanchez can’t be counted out – Out of the four QB’s left in the playoffs, Sanchez is probably the one you would want the least, but if there’s something he’s proven in two years, he knows how to win. Last time vs the Steelers he was 19-for-29 for 170 yards, but didn’t make a turnover, and even ran in a score and had 3 runs for 15 yards and a score. The Steelers need to put their usual pressure on him, and it would be nice to see pressure from up the middle like they did against Joe Flacco in the 2nd half Saturday. The first game the Steelers had one sack for 0 yards, they need to do a better job this time out.

4. A shift in their kick return game – The first game Brad Smith ran back the opening kickoff for a touchdown, putting the Steelers down right off the bat. Smith though, is hurt with a groin injury, and it’s unknown if he will play Sunday. The Jets have turned kick returns to cornerback Antonio Cromartie, and he’s done a nice job, putting 25.8 yards on four attempts with a long gain of 37 yards. The Jets special teams need to be shut down and put in some bad spots on the field for the Steelers to have an edge.

5. Kicking game – This game could come down to the kickers, and the Jets have a pretty good one in Nick Folk, who was 30-for-39 this season. Heinz Field is a tough place to kick, we all know that, and Shaun Suisham can’t miss from 43-42 yards in, like he did Saturday that could have given the Steelers momentum heading into the half. Folk can boom em’, he showed that with a 56-yard field goal at Denver, but then again, lots of kickers have had their longest kicks in Denver. Here’s hoping that the game is well in the Steelers pockets so they won’t have to worry about a last second kick.

Poll Questions From the Win Over the Ravens
NY Posts’ Myers: Jets Will Top Steelers 20-17