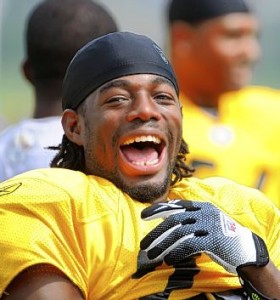 The Steelers goal this offseason was to make sure their secondary didn’t lose two of its top corners, and Sunday they made that happen.

The team a few days back came to terms with Ike Tayor, and today agreed to terms on a multi-year contract with nickel back William Gay.

Gay, who was a restricted free agent, cannot start to practice with the team until Thursday under the new rules set forth by the league. He was chosen by the Steelers with the 170th pick (5th round) of the 2007 NFL Draft, and in his time with the team has three sacks, a pick, and 186 career tackles.

On another note, the team had been talking with former Patriots tight end Daniel Graham, but he has left Latrobe without inking a deal. The Steelers are in the market for a number two tight end after losing Matt Spaeth, who signed with the Bears.

Unhappy Dixon Staying Out of Latrobe; Agent Says He Wants a Trade
Steelers Lose Out on Bringing Back Plaxico Burress; Inks a Deal with the Jets