Second Quarter Thoughts – Rice and the Ravens Running Away 21-7 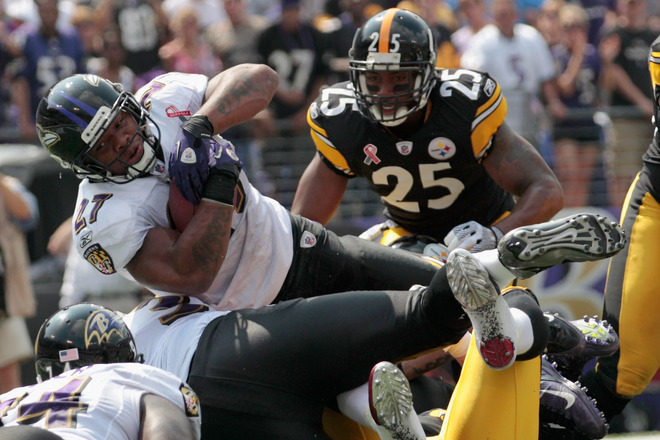 This may be the most woefully unprepared the Steelers have looked under Mike Tomlin in his time as Steelers head coach.

While the offense was finally able to get on the board with a TD from Roethlisberger to Emmanuel Sanders to cut it to 14-7, the defense has been as bad as I’ve seen a Steelers D been in a LONG time.

They allowed the Ravens four straight third down conversions on their touchdown drive to make it 21-7. The LB’s look slow and have missed tackles, the D-line isn’t doing much, and the Ravens TE’s are killing the Steelers.

Against what I have been calling all day a “patchwork” offensive line of the Ravens, the Steelers pass rush, which should have been able to get some heat on Joe Flacco, has done nothing.

The Ravens have outgained the Steelers 265 to 113, and Rice has dominated the game, going for 89 yards on the ground (almost a 9 yard per carry average) and overall the Ravens have run for 103 yards to 60 for the Steelers.

While it was 21-7 at half last January in the playoffs, this time I’m not holding out a whole lot of hope for a Black and Gold comeback. Here’s hoping like last January – I’m wrong.