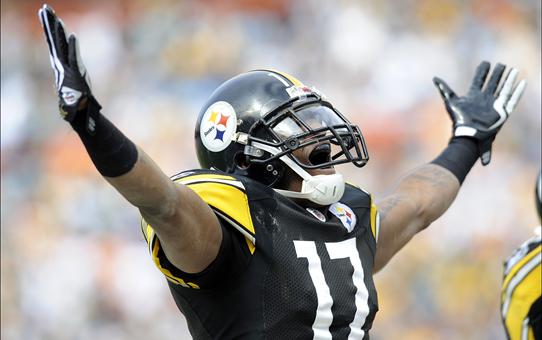 Free agency hasn’t even started yet, but the Steelers are already behind the 8-ball according to just about every expert on TV and radio.

Every time you hear those insiders talk about free agency, the one team that they all say is in a heap of trouble is that of the Steelers.

They have already gone over like a fine tooth comb a bunch of contracts to try and save money, but there’s still a looming issue that this team is going to be very much over the cap when free agency starts.

While the team has most of their big name players under contract, there’s one player that is already planning his exit strategy – that of WR Mike Wallace.

If you’ve watched ESPN or NFL Network over the past 7-10 days, they have already written off that Wallace is as good as gone, and the Pro Bowl WR himself seems to already packing his bags as well.

Wallace was asked on NFL Radio if he’d be interested in playing for the 49ers or Patriots, two teams that will for sure be in the bidding for the soon to be restricted free agent.

Wallace said later in the interview – “I definitely want to get my money,” and there’s no doubt that the Steelers don’t have the salary-cap room to use a $9 million franchise tag on him.

So get ready Steelers fans, this isn’t going to be easy. First there’s the drama that appears to be surrounding when the team will have to lay on fans the release of Hines Ward (I still think this is coming), and now it seems like a given that Wallace is headed for the exits as well.

On the bright side, Wallace is going to garner a first-round pick, and the hope is if he’s gone, a team OUTSIDE the Division and even the conference puts in an offer, and hopefully a team with a high pick.

Best case – The Rams take a shot on him, giving the Steelers the #2 pick (won’t happen, but one can hope).

More likely – #29 Baltimore or #31 New England land Wallace, giving the Steelers two first round picks, but also putting him in the hornets nest of the Steelers two biggest rivals to win the conference.

Somewhere in the Middle – #30 San Fran takes Wallace, which would give the Steelers the 24th and 30th picks, and at least Wallace would be out of sight, out of mind in San Fran.

So what will the Black and Gold look like without Wallace? Antonio Brown and Emmanuel Sanders are your starting WR’s, while Jerricho Cotchery comes back as the number three, and there’s a number of other wide outs to fill the void.

Finally, there is some hope I guess, and that’s the Steelers pull a magic act and find a way to pay Wallace, keeping him with a deal with Pittsburgh.

He did leave a glimmer of hope in the interview on NFL Radio – “I wouldn’t want to go anywhere and leave the situation where I am at with a great quarterback, a great organization or go somewhere where I don’t feel like I could succeed.”

Well, then how about getting this settled and inking a deal? Won’t happen. Book it.