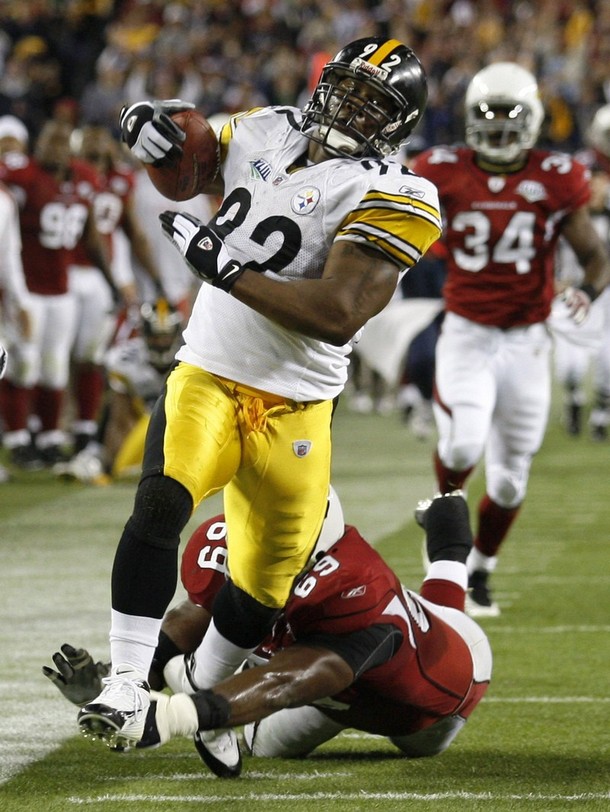 While the Steelers and their fans will be sitting at home watching Super Bowl XLVII Sunday like everyone else, we’ve been spoiled as fans over the years with some great memories over six Super Bowl wins, and of course the heartbreak of two losses.

Today it’s time to look back and remember the good times – and relive “The Best 10 Memories of Steelers Super Bowl History.”

10. SB XIII – Bleier gets hops against the Cowboys – The battle with the Cowboys went back and forth for most of the first half, and the Steelers finally got things under control right before halftime, as they put a drive together in a 14-14 game. From the 7-yard line, the games MVP Terry Bradshaw looked for running back Rocky Bleier, who made a ballet type catch in the end zone for a score that gave the team a 21-14 lead. The play remains one of the highlights in Bleier’s stellar career.

9. SB X – Swanns Sideline catch vs. Dallas – Lynn Swann took home the MVP award of Super Bowl X, and it started with an amazing catch on the sidelines for a 32-yard gain to the Cowboys 16-yard line. The wide out went up in the air and seemed to fly above defenders to make the catch, and even more so to make sure his feet were able to stay in bounds. Just an amazing all around play by one of the games all-time great pass catchers.

8. SB XL – Randel El plays a trick on the Hawks – It was a play that had worked vs. Cleveland earlier in the year, and it worked again on the games biggest stage. Up 14-10 in the 4th quarter, Antwaan Randle El took a reverse from Willie Parker, and fired a perfect strike 43 yards downfield to the games MVP – Hines Ward, for a score that gave the Steelers a 21-10 lead, a lead which they kept to take home their 5th title.

7. Super Bowl IX – Blount picks off Tarkenton after a big hit by Edwards – The Steelers defense and running game dominated Super Bowl IX, and Glen Edwards big time hit on Vikings WR John Gilliam at the Steelers 5-yard line popped the ball high into the air, and Mel Blount picked off the pass to keep the Steelers up 2-0. While it was just one pick, it was a play that showed the big time hitting the defense did in their first championship win.

6. SB XLIII Woodley clinches the win – LB LaMarr Woodley made sure that Cards QB Kurt Warner would not get a shot at a last second bomb to try and upset the Steelers, as he got to the QB and sacked him with just seconds remaining, knocking the ball out of his hands, and Brett Keisel recovered it, saving the win for the Steelers.

5. SB XL – Willie Goes 75 against Seattle – The Steelers were up 7-3 entering the third quarter vs. Seattle, but needed a spark big time and got it from “Fast” Willie Parker, who got perfect blocks and raced through a role on the third play of the third quarter to go 75 yards for a touchdown to put the Steelers up 14-3. The play could not have been drawn up any better, and credit not only goes to Parker but to the five big boys up front that made the hole for him to race through.

4. SB X – Swann makes magic vs. Dallas – Most felt Lynn Swann wouldn’t even play vs. Dallas after suffering a concussion in the AFC Title game vs. Oakland, but Swann not only played, he was amazing. His masterful wild catch against the Cowboys Mark Washington has been replayed on NFL Films about 50,000 times, and it never gets old. He was able to keep his focus to make the play despite tripping and having to climb up Washington and then falling on his chest. Truly a classic.

3. SB XIV Stallworth goes deep for the winner vs. the Rams – The black and gold trailed 19-17 with less than 13 minutes left against the upstart Rams, but MVP Terry Bradshaw teamed up with WR John Stallworth for a perfect 73-yard bomb to put the Steelers ahead for good 24-19. The ball was perfect, just ahead of the outstretched hands of Rams DB Rod Perry, and the HOF WR pulled it in for the prettiest play of SB XIV.

2. SB XLIII Holmes toe-tapper equals a game-winner – Santonio Holmes begged for the ball all of the final Steelers drive down 23-20, and he got it. The final play was a play of magic, as Holmes made an amazing catch in the corner of the end zone keeping his feet down and holding onto the ball. The play earned the Steelers the win, and Holmes the MVP award.

1. SB XLIII Harrison Goes the Distance – LB James Harrison capped off an amazing season in which he was the NFL Defensive Player of the Year as he picked off Cards QB Kurt Warner on the final play of the first half, then raced an amazing 100 yards for a momentum changing score to make it 17-7 Steelers. The play will likely forever remain the greatest defensive play in Super Bowl history.