Steelers Free Agency 2013: Who Will Stay And Who Will Go 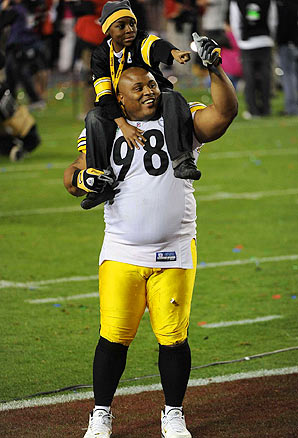 After an 8-8 season, the Steelers know that they will have to answer some big questions this offseason. The first one being free agency. Who is going to stay and who is going to go. The Steelers have eighteen unrestricted free agents this year. A lot of them are players that have helped the Steelers be so successful in recent years. Names like: Larry Foote, Mike Wallace, Casey Hampton, Keenan Lewis, and Rashard Mendenhall. We are going to break down their key free agents and what kind of position this will put the Steelers in for the 2013 season.

Mike Wallace is the hot free agent in the NFL this year. As you may know, it seems that the Steelers will not be getting Wallace back under contract for the future. Wallace is ready to collect a paycheck of what he feels he is worth. The Steelers however, do not feel Wallace is worth what he wants. How do we know this?

When receiver Antonio Brown got a new deal over Mike Wallace before the start of the 2012 season, while Wallace was holding out for a new deal, seemed to have caused tension in the locker room for the Steelers receivers when Wallace returned for the regular season.

Rumors say that the Miami Dolphins are showing high interest in Mike Wallace and are looking to add him to the team to give second year quarterback, Ryan Tannehill, a deep threat option. I believe the Steelers have made their piece with losing Wallace, but how will they replace him? They will most likely look for a receiver or two in the NFL Draft.

Foote has been a solid role player for the Pittsburgh Steelers for a decade. If you remember, Foote left the Steelers in 2009 to play for his hometown, the Detroit Lions. After that season was over, Foote had no desire to continue his career in Detroit.

He missed his place on the Steelers roster. Reports have been released that the Steelers and Foote have been talking on a new deal. Foote is now heading into his twelfth season in the league, however, he is coming off one of his best seasons as a pro. How long can he keep it up if he stays with the black and gold?

Lewis, who ironically was friends with Mike Wallace growing up, is also going to be a free agent. When the season ended, reports said that Lewis should be Steelers’ first priority of the offseason.

However, even with the Steelers getting under the salary cap by restructuing a number of players’ contracts, the Steelers did not re-sign Lewis. Now after signing cornerback William Gay after being released by the Cardinals after one season, Lewis may not be as a high priority as expected. It looks that they will let Lewis test the market before giving him an offer as the Steelers do often.

Think back to 2010 when the Steelers let safety Ryan Clark test the market before resigning him as a Steeler. Lewis had a very productive 2012 season. However, with Gay back, they may just look for another corner in the draft to make up for the talent.

Lastly, will the Steelers bring back Mendenhall? The five year pro has had an up and down career as far as productivity. He has only had two, one thousand yard rushing seasons in the league. Injuries do have a big role in this, but fumbles do as well. Mendenhall fumbled the ball three times on only fifty-one carries last season. He may be on the boarder of a bust in a lot of people’s eyes.

He also may be the blame of the Steelers’ lack of a rushing attack over the past couple years. It does not seem that the Steelers will be bringing him back, but how will they answer these problems? In Addition, running back Chris Rainey was released from the Steelers the day he allegedly assaulted his girlfriend. The Steelers will need to re-build this running attack to take pressure off of quarterback Ben Roethlisberger.

March 12th kicks off the start of free agency around the NFL. It will be interesting to see how many players the Steelers will get back for the future. Will the Steelers get a big free agent this year? Knowing the Steelers organization don’t expect it. They love building through the draft. However, they have found some gems in free agency in the past. For example: James Farrior, Ryan Clark, Mewelde Moore, Charlie Batch, and Shaun Suisham. We are getting closer to seeing our 2013 Pittsburgh Steelers.