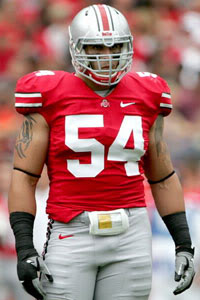 Every NFL team gets 30 pre-draft un-local visits where players workout with teams. Scouts and coaches get to evaluate the player and then are interviewed and grilled by questions by the team’s staff. The Pittsburgh Steelers have started their process of evaluation players as the draft is now 24 days away. The Steelers will workout Ohio State’s outside linebacker, John Simon, Texas A&M’s running back Christine Michael, and Florida State’s inside linebacker Vince Williams.

John Simon – Bios provided by CBS Sports: “Arguably the most relentless and motivated player in college football, Simon has been a force for the Ohio State defensive line since stepping foot on campus four years ago and lives in the weight and film rooms.

A well-known workout warrior, he is a regular on Bruce Feldman’s “Freak List” and his football dedication and work ethic prompted coach Urban Meyer to use the word “Tebowish” to describe Simon.

A five-star recruit out of Cardinal Mooney in Youngstown, Simon was mostly a reserve as a true freshman before becoming a sophomore starter in 2010.

He had a team-best 16 tackles for loss and seven sacks in 2011, adding 53 tackles and earning first-team All-Big Ten honors. The sparkplug of the Ohio State defense, Simon played a lot of five-technique in the Buckeyes’ hybrid 3-4 scheme as a junior, showing his versatility inside at defensive tackle and in space at linebacker.

Simon earned All-Big Ten first-team honors in 2012 and was one of eight semifinalists for the Lott IMPACT Trophy. He led the Big Ten with 9.0 sacks and was third with 14.5 tackles for loss.” Projection: Rounds 2-4

Christine Michael – “Michael exploded onto the Big 12 as a true freshman, earning the coaches’ Freshman of the Year award for leading the Aggies with 844 rushing yards and 10 touchdowns despite starting only four games.

Michael rotated with Cyrus Gray as the Aggies’ starting running back in 2010 and was leading the team with 631 yards and four scores over the first eight games when he was lost for the remainder of the season after suffering a broken right leg against Texas Tech.

In 2011, he once again demonstrated his talents, rushing for a career-high 899 yards and eight scores in the first nine games (including six starts) before tearing the ACL in his left knee against Oklahoma.

Michael entered the 2012 season rated by some talent evaluators as the top senior running back in the country, but was nothing more than a reserve as a senior after landing in head coach Kevin Sumlin’s doghouse due to some attitude issues. However, he did remain productive as the goal-line back with 12 rushing touchdowns.

When healthy, Michael has shown many of the attributes scouts are looking for in a headlining back. He still has talent, and could warrant a second-day selection with his upside.” Projection: Rounds 3-4

Vince Williams – “A highly regarded prep prospect, Williams signed with Florida State over the likes of LSU, Florida and Ohio State. He played in 12 games as a true freshman, ranking second among the team’s first year players with 10 tackles.

A back injury forced him to redshirt in 2009 and he saw only limited duty as a backup in 2010, recording 17 stops. He earned the starting inside linebacker role in 2011 but actually shared the role with Telvin Smith. Despite starting 12 of 13 games and having the action funneled his way in FSU’s 4-3 alignment, Williams recorded “just” 54 tackles, fifth on the team.

Williams wasn’t significantly more productive during his senior season, recording 59 tackles, including a career high 6.5 for loss, but he showed improved instincts and physicality. Invited to the Senior Bowl, Williams turned a few heads in Mobile with a couple of eye-popping hits and could have positioned himself for a rise up draft boards should he work out well.” Projection: 7-FA

As the draft gets closer, we will be breaking down every player the Steelers bring in for workouts. The Steelers will most likely draft someone they bring in for evaluation.