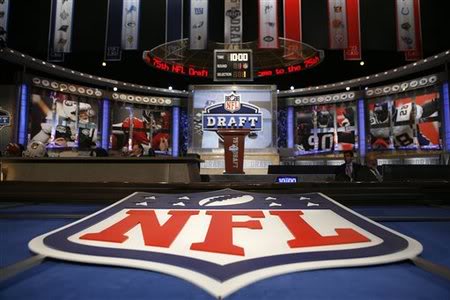 OLB Khaseem Greene – CBS SPORTS: “Greene is a perfect example of one reason why the Tampa Bay Buccaneers are excited about head coach Greg Schiano after his first season with the team. Greene signed with Rutgers as a relatively low priority safety prospect but as he grew, Schiano and his staff elected to move him to weak-side linebacker, where he emerged as arguably the most impactful defender in the Big East in 2011.

This wasn’t the case of a talented player riding the bench. Greene demonstrated his playmaking ways early on, tying for the team lead in interceptions as a redshirt freshman (despite only starting one game) and then leading the team with three interceptions as a full-time starting free safety in 2010 (also posting 77 tackles and four forced fumbles).

While productive as a defensive back, few anticipated Greene’s explosion in 2011 as the Big East’s leading tackler (141), earning him the conference’s co-Defensive MVP honors. Greene would have been even more productive had he not suffered a gruesome broken right ankle in the Pinstripe Bowl victory over Iowa State. He recovered from the injury and proved as a senior no worse for wear, leading the Big East yet again with 125 tackles, including 10.5 tackles for loss, 5.5 sacks and an eye-popping six forced fumbles.

Greene’s size (or rather, lack thereof) limits his potential in the NFL. He isn’t athletic enough to move back to safety and his struggles taking on and shedding blockers means he’ll likely only fit as a chase (weak-side) linebacker in the 4-3 alignment. In this role, however, he has the speed and playmaking skills to flourish.” Projected: Round 2

S Phillip Thomas– NFL.com: “Based on his play as a junior, it looked as though Thomas was going to assert himself as one of the top safeties in the 2012 draft class. But a gruesome leg injury (broken left leg, dislocated ankle) suffered in a non-contact drill just three days before the 2011 season opener dashes those hopes. He appears to be in full strength for his second senior season, however, as the hard-hitting team captain with fair ball skills leads his defense in its first year in the Mountain West Conference.

A second-team all-state pick out of California, Thomas was a threat as both a defensive back and running back. His tenacious attitude made coaches place him on defense during his redshirt season, and earned him playing time in every game as a reserve in 2009 (30 tackles, 1.5 for loss, two interceptions). Thomas started 11 of 12 games played the following year, making 64 tackles, 3.5 for loss, forcing two fumbles, intercepting three throws and breaking up nine others.

Thomas returned from injury as good as new, leading the nation in interceptions with eight on the season, returning three for touchdowns. The senior also notched 84 total tackles, with 12 of them occuring behind the line of scrimmage, including four sacks. Add on another five pass breakups and four forced fumbles, and Thomas was a box score stuffer.” Projection: 6-FA