Steelers Have More Pre-Draft Visits One Being Jarvis Jones 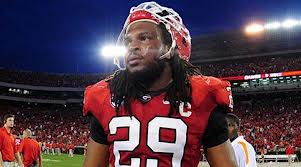 On day two of pre-draft visits/workouts, the Pittsburgh Steelers brought in a total of five players to visit and workout. That is a total of eight players now after the three that we reported yesterday. One of the players they brought in was the country’s best pass rusher in 2012, Jarvis Jones from the University of Georgia. Rumors say that Jones has had issues with attitude problems, and his neck/back injury could cause Jones to slip further than he was projected at first. Let’s take a look at the players the Steelers brought in today. Again, our bios are brought to you by CBS Sports.

Jones earned playing time immediately with the Trojans, seeing time primarily on special teams and as a backup strong-side linebacker in their 4-3 alignment. He suffered a sprained neck in the eighth game of the season (Oregon), however, and missed the rest of the year. Team doctors refused to clear him for participation the following spring and after seeking other opinions, Jones elected to transfer back to Georgia.

He sat out the 2010 campaign per NCAA transfer guidelines before absolutely exploding onto the SEC scene the following season. Primarily asked to rush the passer as an outside linebacker in Georgia’s 3-4 alignment, Jones led the SEC in sacks (13.5) and tackles for loss (19.5) while posting 70 tackles overall (second on the team by two stops). He earned consensus first-team all-conference honors, quite a few All-American nods and was voted a finalist for the Butkus Award as the nation’s best linebacker.

Having earned First-Team All-SEC honors in each of his two eligible seasons at Georgia, Jones has proven himself to be a playmaker against both the pass and run. The 6-2, 242-pounder led the country in three critical statistics — sacks (14.5), tackles for loss (24.5) and forced fumbles (seven) despite missing two games (Kentucky, Florida Atlantic) due to injury.

As dynamic as he is, the redshirt junior’s medical grade will ultimately determine his draft status. He was diagnosed with a mild case of spinal stenosis in 2009 and some NFL doctors may be unwilling to clear him.” Projection: Top 20

Michael Mauti – “Usually high-profile recruits out of the state of Louisiana end up in Baton Rouge, but Mauti followed his brother north to Penn State in order to be a part of the school’s rich linebacker tradition. However, knee injuries have stunted his development and put his NFL future in doubt because of long-term durability concerns.

Mauti, whose father starred at Penn State in the ?70s and went on to have a seven-year NFL career, spurned several SEC offers out of high school and played in every game as a true freshman reserve in 2008.

He suffered his first ACL injury (right knee) prior to the 2009 season and took a medical redshirt. Not yet at full health, Mauti was a part-time starter in 2010 before starting the first four games in 2011, but another ACL tear (left knee) ended his season.

He is expected to return as a starter in 2012 as a senior, but with two surgically repaired knees, fans and scouts alike will be anxious to see how Mauti plays post-injury.” Projection: Rounds 7-FA

Jamie Collins – “Collins was a two-way player at Franklin County High School in McCall Creek, Miss., and was rated as a three-star prospect by Rivals.com. A good athlete, he was ranked the No. 12 combo passer in the nation by MaxPrep.com and was selected to play in the Mississippi-Alabama all-star game after winning a state title.

He saw action in all 13 games as a freshman defensive back at Ole Miss in 2009, recording 48 tackles, three tackle for loss and a pair of sacks.

Collins made the move to linebacker the following season. He earned honorable mentioned All-CUSA honors while starting six of the final seven games and finishing the season with 71 tackles while appearing in all 12 games.

Collins made his second move in as many years as a junior, sliding to the “Bandit” end position in the Rebels’ 4-2-5 scheme. He racked up team highs with 98 tackles and 19.5 tackles for loss, and was second on the team with 6.5 sacks.

Ole Miss suffered through a miserable winless season in 2012, but Collins continued to shine despite the lack of talent around him. He was voted to the All-Conference USA team after piling up 20 tackles for loss and 10 sacks – third in C-USA – to go along with 91 tackles total – which was 26 more than any other Rebel.