Will The Steelers Draft OLB Jarvis Jones If Available In First Round? Poll Below 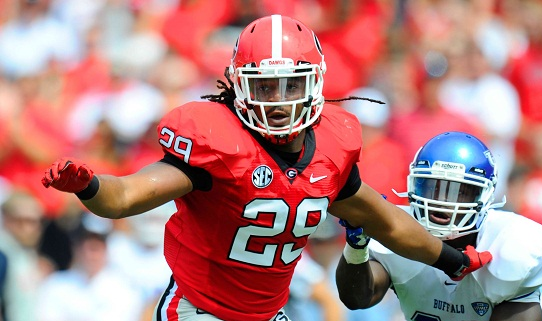 Steeler nation it is that time of year again. The NFL draft is right around the corner and everyone has an opinion on who the Pittsburgh Steelers will take in the first round with the 17th pick over all. The buzz lately in many mock drafts is that if still available the Steelers will choose outside linebacker Jarvis Jones from Georgia.

At first glance, the pick of Jones would seem to be a no brainier.  Jones led the nation last season in three major defensive categories, sacks (14.5) tackles for loss (24.5) and forced fumbles with 7.  Jones is considered by many to be one of the top prospects in the 2013 draft.  The Steelers also brought Jones in for a pre- draft visit April 2nd.

Ok now for the catch … Jarvis Jones began his college football career at USC but after a neck injury his freshman season he was diagnosed with spinal stenosis.  This condition has forced some NFL players into retirement most notably wide receiver Michael Irvin.

The USC medical staff then refused to clear Jones to play football.

Doctors at Georgia cleared Jones later. He continued his football career there. Jones went on to have a stellar career at Georgia.

So will Jones be a medical risk as a pro? Or continue where he left off at Georgia?

Another cause for concern was Jarvis Jones’s poor performance at his Pro day workout. Jones ran a slow 4.9 seconds in the 40-yard dash. Former general manager Charley Casserly stated on NFL network that he could not remember any linebackers Jones’s size (245 pounds) who overcame 4.9 seconds in the 40 and still played well in the NFL.

There are also reports that Jones has poor practice habits and just shows up on game days. If these rumors are true, can he continue to have success at the next level?

So you see the pick of Jones to the Steelers is far from cut and dry despite what many draft experts are predicting. Add to the equation the vote of confidence the Steelers’ coaching staff gave Jason Worlids recently and one wonders if outside linebacker is a top priority in the Steelers’ minds.

It is this writer’s opinion that the Steelers will pass on Jones. The risk just outweighs the reward, in a year when the Steelers just cannot afford to gamble having more needs than in past drafts.

The Steelers also do not make a habit of taking an outside linebacker in the first round of the draft. Lawrence Timmons was the last one in 2007 and they moved him to the inside.

It usually takes an outside linebacker two years in the Steeler’s system to see significant playing time anyhow, and I believe there is plenty of talent that can be had at the position later in the draft.

The 2013 NFL draft begins April 25. Few teams are better at holding their cards close to their vest than the Steelers on draft day. Only the Steelers truly know their plans.

So will the Steelers choose Jarvis Jones in the first round? Will he even be available? What is your opinion?

Steelers Gab Chat This Wednesday
Video: ESPN Talks About If The Steelers Should Keep Sanders