Are The Bengals The Team To Beat In The AFC North In 2013? 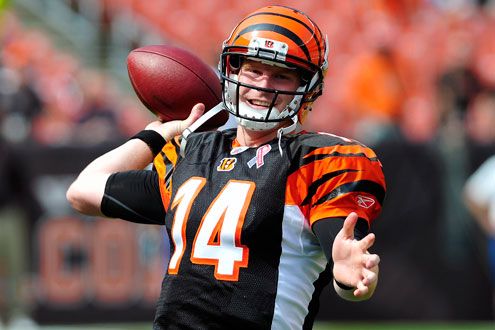 Last season the Steelers 2012 campaign came down basically to :14 seconds. It was December 23rd, and the Steelers last meaningful offensive play of the year was an interception by Ben Roethlisberger that Reggie Nelson pulled in.

Two players later, Josh Brown kicked the Bengals into the postseason, and the Steelers right out of it.

It was a stunning blow to a season that held promise, but here it is now seven months later, and through plenty of moves and plenty of chatter about getting older, the Steelers again will try to defy the odds and doubters that feel 2013 will be nothing more than another near .500 season.

The early returns by those that study the league inside and out show the Steelers to be right about .500, with them being maybe the second or more likely the third place team in the division.

The Bengals and Ravens, who of course won the whole thing a year ago, are supposed to be the two teams to beat in the division, and there’s a couple good reasons as to why.

1. Bengals Defense – Last season the Bengals defense seemed to get better as the season went, and in winning seven of their last eight in the regular season, it was their D that seemed to set the tone. They have a number of solid young players that can make like tough for an opposing offense. Players like Carlos Dunlap, Domata Peko, Rey Maualuga and now adding some guys like James Harrison will make this unit a force again in 2013.

2. Flacco, Rice and Smith – The Ravens last season let Joe Flacco loose, and in doing so he stepped up and lead them to their first Super Bowl since the 2001 season. This season the club will lean not only on Flacco, but also again on RB Ray Rice and up and coming WR Torry Smith. These three will all have a big impact if the Ravens have the post Super Bowl hangover or not, and odds are they will again play well, which is bad for the Steelers.

3. Is This The Year For Dalton and Green? – These are two excellent young Bengals players who will be the focus of their offense going into 2013. Andy Dalton threw for 27 TD’s last season, but still has growing to do. As for Green, he made the back-breaking 21-yard catch to basically kill the Steelers in the do or die game in December. He could be the next great wide out in the game – 2400 yards and 18 TD’s in two seasons is nothing to sneeze at.

These are serious reasons why it looks like the Steelers WON’T bounce back and have a big season in 2013, but at the same time, they have weapons of their own. What are your thoughts on the division with three weeks till camp?

Will Jarvis Jones Outshine Fellow Rookie Barkevious Mingo In 2013?
Do Any Big Name Free Agents Still Out There Make Sense To The Steelers?