Steelers Fail To Inspire; Fall To 0-2 In Lackluster 24-13 Loss To Redskins 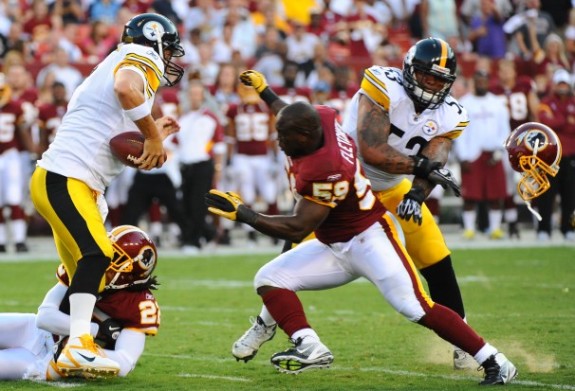 The Steelers are now 0-2 in the preseason following a rather lackluster 24-13 loss in the Nations Capital Monday night to the Redskins.

There was, again, more bad than good, and while it’s just the preseason, there has to be some concern about how poorly the Steelers have performed in the first 120 minutes in practice games.

Here’s some observations from the loss tonight:

1. The O-Line Looks Awful – There was little to brag about when it came to the offensive line, as the line had a bunch of penalties, and Markuice Pouncey got abused all night, with Barry Cofield looking like Deacon Jones vs the Steelers. This spot had better get good quick, or Mike Tomlin will need to make changes.

2. Again Not Playing Smart – Too many penalties (thanks OL) and eight penalties for 95 yards and three turnovers are not going to get it done in the regular season. But hey, at least they didn’t have a blocked punt tonight.

3. Bell Down Again – Last week rookie Le’Veon Bell didn’t play with a sore knee, and tonight vs the Redskins he got four carries to start the game – then left with a foot injury. Fans are chomping at the bit to see Bell in real action for a decent amount of time, but at this rate, he’ll get more time on the exercise bike and trainers tables than on the field.

4. Dwyer Saves The Day, Sort Of – Jonathan Dwyer should have clinched a job on the roster Monday, as he led all backs with 14 carries for 68 yards, nearly 5 yards a carry. There’s been a lot of chatter about Dwyer having issues making the roster, but despite the fumble after a run, he did enough to get a roster spot sealed.