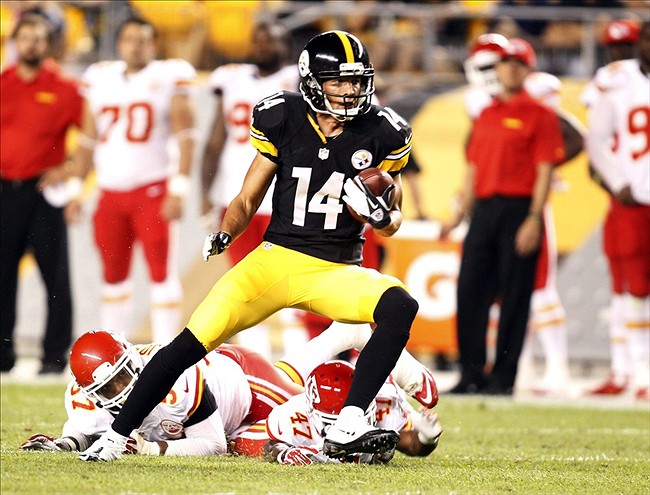 The Steelers take on the Carolina Panthers in the fourth and final preseason game Thursday, and with it most of, if not all key starters will sit and watch from the sidelines.

There’s still plenty to play for when it comes to not only trying to avoid a 0-4 preseason, but also there’s a lot of position battles for a roster spot and backup spots up for grabs.

For some, it will be the final time certain players take the field for the Steelers. For others, it’s a shot to live out a dream and make the roster for the six-team NFL champions.

Today we take a look at some of the spots up for grabs, and who has the upper hand heading into Thursday night.

Right Outside LB – Jason Worilds and rookie Jarvis Jones have been going at it through out all of camp, but if you’ve seen any of the games, you know that Jones has the position all but sewn up after some huge splash plays in the first three games. He was hurt in the last game and won’t play vs Carolina, but there’s no doubt he’s been the better player in camp and deserves the call as the starter.

Punter – The Steelers brought in Brian Moorman to battle Drew Butler, but from all indications, it looks like Butler is the winner of this solid battle. Moorman is behind Butler in average this preseason, being behind by nearly seven yards – 47.3 for Butler, to 40.3 for Moorman. No doubt with a special teams that hasn’t been very good, Butler has done enough to keep the job in 2013.

Offensive Line Backup Spot – Two players that have put up a pretty good battle is Kelvin Beachum and John Malecki, but from watching the first three games, Beachum looks like the better player at this point. Malecki has been physical, but has missed on a couple plays, and while he should make the team and get playing time, Beachum has looked good.

Joe Long and Guy Whimper are going at it for what could be the final spot on the O-line, and Long was promoted to the second team, showing the coaches have confidence in him, he should make the roster.

Fifth Receiver Spot – Derek Moye and Justin Brown seem to be the two players going tooth and nail, and both late in games have shown skills, which makes this kind of a tough call. Moye has six receptions for 72 yards and a touchdown over his past two games, overtaking Brown who made a good impression at the start of camp.

Look for Moye to win the job, but while he will have a tough time making it on the field catching passes unless the Steelers get hit with a lot of injuries, he will have an impact on special teams.

Tomlin Rules Out Four Players For Thursday; Jones To Play Plenty At QB
Steelers Come In At #1 In Social Media Equity