Steelers focus on 15th overall pick should be in defensive backfield 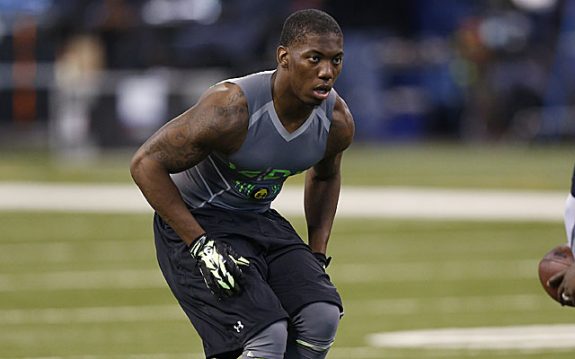 Darqueze Dennard at the 2014 NFL Combine

The time period between the NFL Combine, free agency and the NFL Draft is always a hectic time for teams and those who speculate on which players may go to a certain team.  The Pittsburgh Steelers have shown an increased interest at this point of that period in fixing deficiencies in their defense.  With the team building for the future, it makes sense that the Steelers are focused on building from a veteran base and finding the right personnel in rookies and younger free agents that can compliment.  After facing two straight seasons without a playoff appearance, the Steelers would like to return to the type of defense that was once the most-feared in the league.

Pundits have argued that the Steelers will be most interested in stopping the run.  With rumors that defensive tackle Casey Hampton will try the free-agency market, many would suppose that the team will go after a top college player in the draft to help fill that spot.  The Steelers defense ranked second in the National Football League in rushing yards allowed in 2012 at 90.6 yards-per-game.  During the 2013 season, Pittsburgh slipped to 21st in the same category (115.6 yards-per-game).  In 2001, the Steelers followed that wisdom by selecting Hampton.  While the Steelers have adopted a philosophy of being a tough run defense, those who believe that Notre Dame nose tackle Louis Nix will be the team’s first target in the 2014 draft may be prematurely determining Pittsburgh’s draft board.

Teams in the NFL have stepped back from a run-first offense since the time that Hampton became the big man in the middle of the defensive line.  The high-flying offense of the Denver Broncos has set a tone in the league that rushing is about grinding out the necessary yardage to open up a defensive backfield to hard-striking targets of wide receivers and tight ends.  To use Denver as an example, the Broncos gained 5,444 yards passing on 675 attempts (461 completions).  That resulted in 55 touchdowns.  Denver rushed 461 times for 1,873 yards scoring 16 touchdowns.  Respectively, the Broncos had 7.8 net yards per attempt through the air for 293 first downs and 4.1 yards per rush for 107 first downs.  That placed Denver at the top in the NFL in passing and seventh in rushing.

These top five offensive statistics shown define a pattern in 2013:

Denver went to the Super Bowl.  The New Orleans Saints were a game behind the Carolina Panthers in the NFC South and won a wild-card spot to the playoffs.  They lost to the Super Bowl Champion Seattle Seahawks in the next round.  The Detroit Lions were edged out of a playoff chance by the Green Bay Packers.  The Packers lost to the San Francisco 49ers in the wild-card round.  The San Diego Chargers won their wildcard match-up against the Cincinnati Bengals only to lose to the Broncos.  The New England Patriots went to the divisional round to lose to the Broncos. The Atlanta Falcons were the only team that used the pass for the majority of their offense to not see a playoff spot.

Of the teams who went to the playoffs, only Marshawn Lynch (Seattle) and Ryan Matthews (San Diego) were in the top five in the NFL in rushing attempts.  Lynch had 12 rushing touchdowns and Knowshon Moreno (Denver) had ten.

The Seattle Seahawks defense allowed an average of 101.6 rushing yards per game in 2013.  The Steelers allowed 115.6.  Conversely, Seattle had 39 total takeaways (with 28 interceptions).  Pittsburgh had ten interceptions and 16 fumble recoveries.

While it is obvious that the Steelers can’t just let teams run all over them (literally), their focus in the first round of the NFL Draft in 2014 should arguably be spent on finding a defensive back, preferably a safety, as the 15th overall pick.  To be a complete defense, the Steelers need to adapt to the way the NFL has progressed and find players who can not only compete, but finish, in a mature way that results in getting the offense back on the field and keeping the opponents off of the board.

According to CBS Sports, the highest “rated” defensive back in the 2014 draft class is Darqueze Dennard, a cornerback from Michigan State who won the 2013 Thorpe Award.  The second is Hasean Clinton-Dix, a safety from Alabama.  ‘Ha-Ha’ Dix’s name has been thrown around Steelers message boards, but the Steelers organization has kept their plans close to the vest.