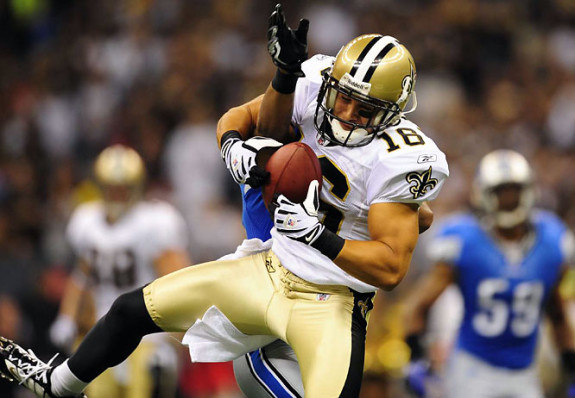 According to a Tweet by CBS Sports analyst Jason LaCanfora, the Steelers are interested in bringing veteran free agent wide receiver Lance Moore to Pittsburgh for a visit on Tuesday.  Moore has ties to backup quarterback Bruce Gradkowski while playing at Toledo.

Steelers are bringing in WR Lance Moore for a visit on Tuesday. RB James Starks visits there midweek

//
In 2012, Moore caught a career-high 1,041 yards.  His production went down during the 2013 NFL Season as Saints quarterback Drew Brees found other targets, giving Moore just 37 catches for 457 yards and two touchdowns.

Some feel that a bringing in another veteran receiver to compliment Antonio Brown makes sense.  Others wonder if this signals that the Steelers are looking past re-signing Jerricho Cotchery to the team.  While it is speculation at this time, the Steelers could use Moore to give Brown more opportunities to spread the field and mentor second-year receiver Markus Wheaton.  The signing of Moore could also free-up tight end Heath Miller who was hampered by injuries in 2013, but came on strong toward the end of the season.