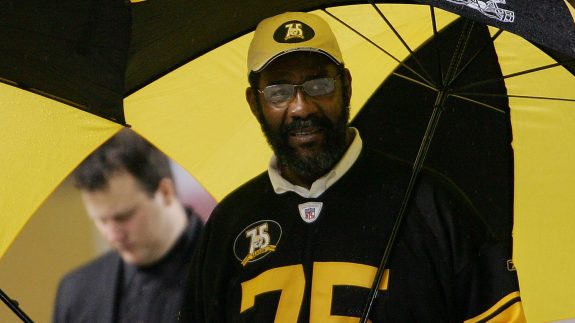 Joe Greene will always be remembered as one of the greatest in the Pittsburgh Steelers franchise.  His number ’75’ jersey will be retired officially by the Steelers franchise during halftime of the week nine game against the Baltimore Ravens at Heinz Field on Sunday, November 2, 2014.
Former Steelers teammates and Hall of Famers Lynn Swann, Mel Blount, and Franco Harris share their thoughts on Joe Greene the person.
http://youtu.be/UjL14aslch0

Former Steelers teammates and Hall of Famers Mel Blount, Lynn Swann, and Franco Harris reflect on why Joe Greene’s No. 75 should be retired.
http://youtu.be/XLrzg07Eld0