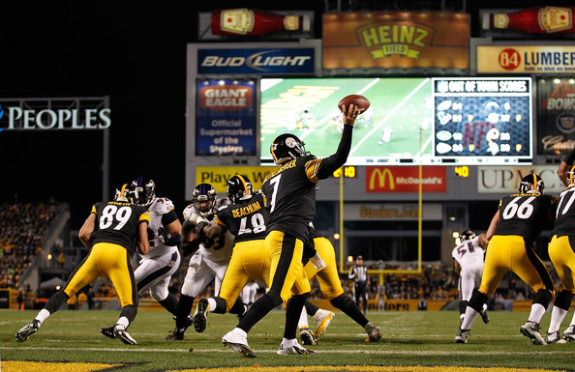 For the second straight week, veteran Steelers quarterback Ben Roethlisberger put up an incredible number of points.  In their win on Sunday night over the Baltimore Ravens, the Steelers offense scored 43 points following a 51-pointer.  Roethlisberger put back-to-back six touchdown (passing) performances in two games that were predicted to go much differently for Pittsburgh earlier in the season.
Most Games with 6 TD Passes in NFL History

Roethlisberger became the first NFL quarterback to throw 12 touchdown passes in a two-week span, joining Y.A. Tittle as the only quarterback in league history with at least six touchdown passes in a game in the same season.  In his first seven games, Roethlisberger completed just 45 perccent of his throws that were a minimum of 15 yards downfield.

During the past three games, Roethlisberger has been a leader on the Pittsburgh offense, unselfishly spreading the ball around to at least 10 different teammates.

Following the 43-23 win over the Ravens, Roethlisberger talked about the game.  “It didn’t start our pretty at all,” said Roethlisberger.  “I’ve said if before, as long as we win that’s all that matters.  I thought the guys played well coming down the stretch.”  Roethlisberger wasn’t shy about giving credit to his teammates in the win.  When he was asked about how he felt after putting up six touchdowns during two consecutive games, Roethlisberger answered, “It means the guys are catching touchdowns and its fun because, especially that last one, I was so happy for Matt Spaeth.  That was such a big play for him…He has been around a long time and puts a lot of dirty work in.  A lot of blocking.  For him to get that big touchdown, I was just so excited for him.”

Ben on Martavis Bryant:  “He wants to be great.  He puts the work in…He’s making plays out there, same thing with Markus Wheaton.  You put the ball up and expect them to make plays, and they did.”

Ben on the Steelers defense creating turnovers:  “That’s the key, it’s not always that our defense is getting them, but we’re capitalizing.  We don’t want just three points or to punt it back.  So when we can take advantage of those turnovers, we just have to keep doing it.”

Ben on Antonio Brown:  “Any time you get the ball into his hands he is something special.  That’s why I said earlier this week that the receivers that I play with, he’s at the top of it…he’s fun to watch.  I’m glad he’s on my team, I’ll tell you that much.”

Ben on Joe Greene being honored at Heinz Field and the atmosphere:  “It felt like old school early days of being here.  The fans were into it.  It was loud.  It was a perfect night for football.  To honor Mr. Greene was so great and it really was an awesome thing. We wanted to go out and put on a show for our fans and make Mr. Greene and all the other former players proud.”