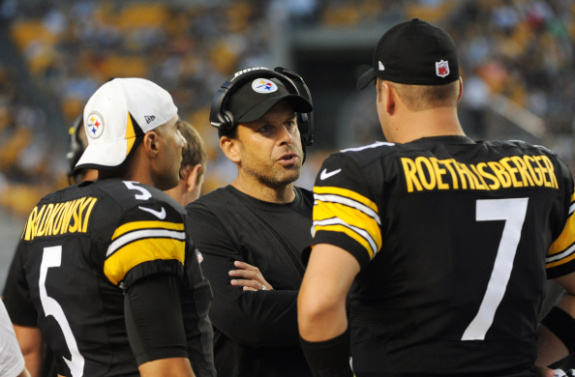 Take Three: Roethlisberger’s performance is an issue that has to be fixed

Roethlisberger has had one of the strangest seasons this year. He had back-to-back games where he gave an elite performance and has taken some games on the chin, failing to lead effectively. His last three games have been poor performances. Against the Saints, Roethlisberger hit his throwing hand/wrist on an opponent’s helmet and it was obvious that he was hurt. When asked about whether or not Roethlisberger spoke to him at the first quarter break regarding his hand, Tomlin said, “I didn’t because virtually every Sunday things generally happen where he goes through some pain or discomfort or is dealing with something physically. I don’t make it an issue unless it is one. He didn’t make it one so we kept our conversations the way we normally keep them on what it is we need to do as a group.” That could be read that Tomlin and Roethlisberger don’t communicate effectively, but Tomlin added, “I knew that if it was a legitimate issue for (Ben) in terms of jeopardizing his ability to perform, that he would talk to me about it or the doctors would.”

The thing is, it was obvious that the injury did affect Roethlisberger’s accuracy, but that has been an issue in the past three weeks as well. Tomlin agreed that some of the inaccuracy has been due to additional pressure his starting quarterback in getting in the pocket – a clue that the offensive line isn’t doing their job in pass protection. What hasn’t been addressed, at least publicly, is that Roethlisberger appears to believe that he has to carry the team on his shoulders, even if he isn’t performing well. Some of that could be the fact that he’s a veteran and leader. Some of it could be because Roethlisberger just doesn’t want to admit he is struggling.

When asked about Roethlisberger’s mechanics and whether he pays attention to them when Roethlisberger isn’t performing well, Tomlin responded, “Certainly. When you’re looking at accuracy or inaccuracy obviously mechanics are the first place that you look. But again, sometimes outside forces can affect mechanics.” Tomlin specifically mentioned that Roethlisberger was overthrowing his receivers against the Saints, but felt the pocket was collapsing on his quarterback, preventing him from being able to get into a proper stance to throw accurately. Roethlisberger looked desperate at times over the last three games, often forcing dangerous throws into coverage while overlooking open receivers. One of the mechanics required of NFL quarterbacks is the ability to see the whole field.

Roethlisberger hasn’t been as mobile in 2014. When he has run the ball, he hasn’t looked nearly as quick which may be an indication that all the hits he’s taken over the years are catching up to him. He hasn’t been as elusive to tackles, taking sacks over throwing the ball away – something he’s been prone to for most of his career. While he continues to have good arm strength, his decision-making hasn’t been as sharp.

If the Steelers offense hinges on the level of play from Roethlisberger, then his performance issues have to be fixed heading into the last few games of the season.