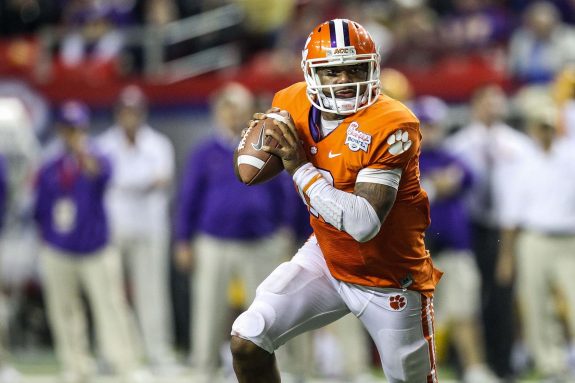 The Pittsburgh Steelers have made such little noise during the free agency signing period that you might almost hear crickets chirping even though it is just now Spring.  Quietly, the Steelers brought in former Clemson quarterback Tajh Boyd who was drafted in 2014 by the New York Jets and then cut in preseason camp.  With a career in question, Boyd attended Clemson’s recent Pro Day and was signed by the Steelers, giving him a second chance and perhaps setting up a training camp battle for the third roster spot at the quarterback position between him and Landry Jones; perhaps even Bruce Gradkowski.

Boyd told Greenville Online that he questioned what he was going to do following his cut from the Jets but that even though others may have counted him out, he wasn’t willing to give up.  “I’ve been playing [football] since I was seven years old.  It’s the same game…When you step out on that field, that’s what you got to do – just go out there and play and understand that you’re made for this.  You’re built for this…”

Boyd is excited about joining the Steelers in April, being reconnected with former teammate Martavis Bryant and his shot at being with a team that has the history it does.  “It’s a premier organization,” Boyd said.  “When you think of NFL football you think of certain teams, and the Pittsburgh Steelers come to mind.”

“I really want this situation to work out and I think it will,” added Boyd.  “Hopefully I can be a Steeler for awhile.”

The 6’1″, 225 pound quarterback didn’t sit around even after he was cut by the Jets.  Instead, Boyd moved to the Fall Experimental Football League (FXFL), a developmental league for the NFL.  He spent time on the roster with both the Boston Brawlers and Florida Blacktips.

As a Senior for Clemson, Boyd helped lead the Tigers to an 11-2 record by completing 283/413 passes for 3,851 yards and 34 touchdowns.  In November of the 2013 season, Boyd set the ACC career passing touchdowns record and finished with school and conference records for passing yards (11,904) and passing touchdowns (107).

“I’ve always continued to work out, but to be honest, when you sign it just puts a different perspective on things,” Boyd said. “You thought you were killing it with the workouts; now it goes to another level.”

Scouting Report:
One of Boyd’s strengths in college was his ability to keep moving his feet while scanning downfield for open receivers.  Boyd is creative, using his arm strength to make accurate passes in mid- to long-range.  Boyd is quick and unafraid to tuck the ball and run, especially on critical third-down situations.  Boyd sets quickly and puts zip on his passes but is able to touch-pass to deep receivers and put it in the perfect place for a catch.  He has good composure even when the pocket breaks down and is able to roll the pocket and throw on the run (both left and right).  A dual-threat quarterback, Boyd has the off-field character that matches his charisma on the field.  Despite lacking the ideal height for a prototypical NFL quarterback, Boyd will need work on letting plays unfold and remaining durable instead of lowering his shoulder and being willing to take a hit. Effective pump fake that makes defenders bite and creates space for his receivers.

Patience could pay off for Steelers in cornerback search
Video: Great Moments In Steelers History