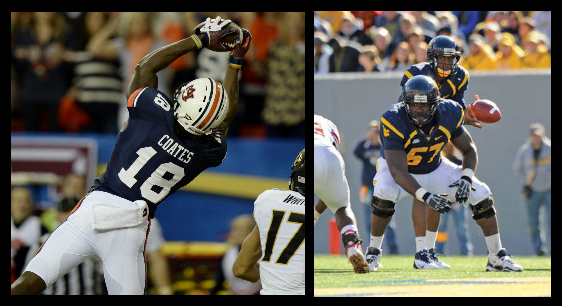 The Pittsburgh Steelers continue their preparations leading up to the 2015 NFL Draft later this month and are reportedly hosting two more prospects on Monday of next week – receiver Sammie Coates of Auburn and offensive lineman Quinton Spain of West Virginia.

Coates put together a good 2014 season with the Tigers as a wideout.  A three-year starter, Coates had seven career 100-yard games and was named second team all-SEC (coaches, AP, Phil Steele).  Coates finished tenth in career receiving at Auburn with 1,757 yards and 13 touchdown receptions.

During Auburn’s Pro Day, Coates expressed frustration just two weeks removed from a physical performance at the NFL Combine.  The rumor floating around, despite finishing among the top five receivers in the bench press, broad jump, vertical jump and short shuttle, was that despite his 4.43 speed, he can’t make the tough catch.  “I heard that from a lot of people,” Coates said.  “But hey, they saw me catch the ball, so what are they going to say now.”

Coats is nearly 6-foot-2, 212 pounds and averaged 21.4 yards on 82 career catches.  Although he was a deep-threat receiver at Auburn, many NFL scouts wonder if he can compete at that level against pros.  Coates insists that he can, but will need to show that he can do more than take the top off of NFL defenses to earn a place on the Steelers’ draft board.

Spain in a big guard projected to be a late-round draft selection.  He is athletic and has the ability to get off of the snap and attack.  At 6-foot-4, 332 pounds, Spain surprised many with his ability to cover short-area movements yet secure a block and push it into the second level, especially in the zone.  With strong leg drive, his wide base and length added to his aggressive nature on the field would give the Steelers depth at not only the guard position but along the interior line.  The area of concern for Spain is his inconsistency using his hands.  Spain has shown a tendency to not utilize the full length of his arms to get a solid hit inside the frame of defenders and will need to work on getting inside the shoulders.  Mike Munchak could tutor this kid into a nice addition.