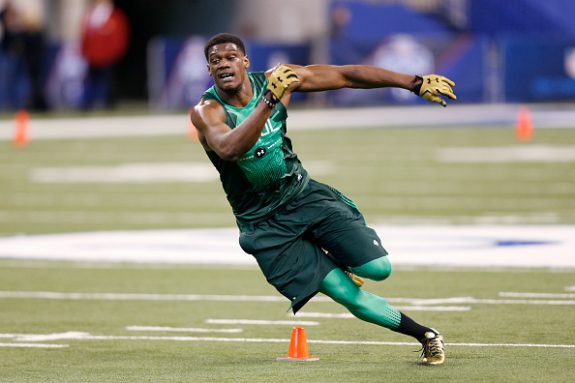 Very good athlete, and though at 6-0 and 188 he’s not the perfect Steeler physical type, he’s a terrific cover player. The Steelers have a desperate need, and Johnson will fill it nicely. Three other teams in 20s—Panthers, Ravens, Colts—would have interest if Pittsburgh passes on Johnson. I’ll tell you what appeals to Mike Tomlin about Johnson: There’s not a more competitive cornerback in this draft.

It always seems like a talented prospect falls to the Steelers every April, and that could be Randy Gregory this year. Pittsburgh is usually reluctant to select a conversion player in the first round, but Gregory is too talented for the front office not to consider him. He would also fill a huge need as an edge rusher, as the Steelers desperately need to improve their ability to get to the quarterback.

Some of Gregory’s issues are documented. He tested positive for marijuana at the NFL Combine and then reportedly showed up below 230 pounds on some of his pre-draft visits. There are even more dire issues that haven’t been brought to the public’s attention yet. However, the Steelers took another troubled player from the Big Ten a few years ago when they spent a second-round pick on Mike Adams. They checked Adams out, and they were content with what they saw. Perhaps history will repeat itself.

22. Pittsburgh Steelers — Eric Rowe, CB, Utah: New defensive coordinator Keith Butler inherits a once-oroud unit in desperate need of an infusion of youth and speed. After heavy investments in the front seven over the past several years, the Steelers may turn to the secondary. Rowe has the length and physicality Pittsburgh has traditionally valued at the position and offers versatility, after starring at free safety earlier in his career.

22. Steelers – Landon Collins, SS, Alabama: He’s a safety in the same Troy Polamalu mold. He can play near the line of scrimmage to cause all kinds of problems for a defense. I worry about him in space, but Polamalu wasn’t great there either.

The Steelers haven’t drafted a defensive back in the first round since — you guessed it — recently retired Troy Polamalu in 2003. The cracks are starting to show in the secondary, and the 6-foot-1, 199-pound Jones is brimming with upside after a sub-4.4 40 at his pro day and a 44.5-inch vertical jump at the combine. Jones will need to refine his man coverage in the NFL, but who better to teach defensive technique than the Steelers? It’s time to invest in a young cornerback high in the draft. — Jeremy Fowler

Between the Hashmarks: Five Takeaways from Tomlin, Colbert Steelers Presser
Steelers Big Board: Draft Selections Pittsburgh Should Have Eye On