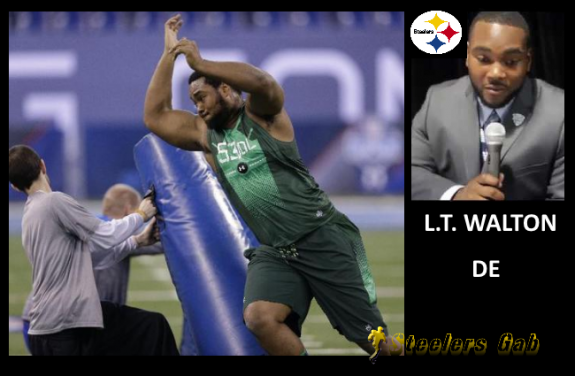 The Pittsburgh Steelers took time out of rookie minicamp on Friday to sign the first of their eight 2015 NFL Draft selections; defensive end LT Walton.  Walton (6-foot-5, 319) was selected in the sixth round (199th overall) out of Central Michigan.

Walton is expected to be inserted into the rotation along the defensive line during the remaining training opportunities leading to training camp at Latrobe, PA, and will join veteran players when ‘vet’ camp begins in June.

Prior to the NFL Scouting Combine and the Draft, Walton kept a draft diary for the Detroit Free Press after playing in the Shrine Game in January of this year. “I feel like the work that I’ve put in these past couple years has paid off for me, and it’s about to pay off in these next couple days,” Walton wrote in his piece.  The Steelers made that dream come to life when they offered Walton a four-year deal Friday (terms not disclosed).  Read more of LT Walton’s draft diary here.