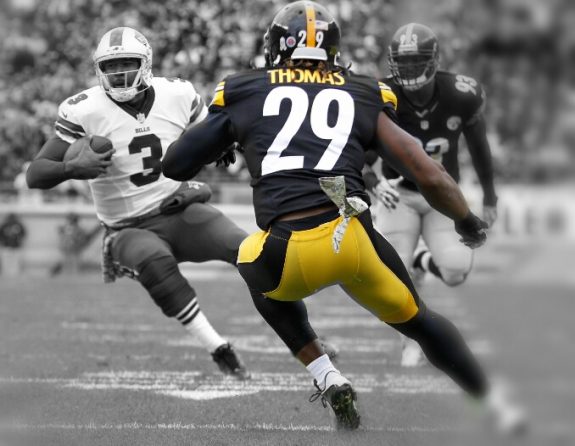 As the start of the 2015 NFL season is less than a couple of days away we will analyze the safety position and preview all of the Pittsburgh Steelers training camp battles.

The Steelers will have a new starter no matter how you look at it because future Hall of Fame safety Troy Polamalu announced his retirement this offseason. Pittsburgh’s defensive secondary will need to cut down on giving up big plays if the Steelers want to make a deep run in the playoffs. Last year was a very uncharacteristic season as Pittsburgh ended up in the middle of the pack in the league in defense. New defensive coordinator Keith Butler will need the back end of the Pittsburgh defense to gel quickly and do a better job of communicating with each other.

Mike Mitchell – Last year’s big free agent pickup had a subpar season. Mitchell was second in tackles but didn’t have a single pick. Pitt needs a big season from Mitchell. He played on two torn groins musckes and with a season under his belt, should be much better in 2015.

Shamarko Thomas – Thomas has been groomed as Polamalu’s apprentice ever since he was drafted. Needs to stay on the field and has had a lot of injury problems. Could be a difference maker if healthy. His time is now.

Gerod Holliman – (Rookie) 7th round pick from Louisville who has a chance to make the roster. Led The NCAA in picks last year with 14. A playmaker, but is a horrible tackler in space – has to improve in that area if he wants to be a solid pro.

Ross Ventrone –  His long hair will remind people of Troy. An undrafted free agent from Villanova in 2010, he was promoted to the 53-man roster last year. Played in stints. Has a chance to stick as a good special team’s player.

Will Allen – Tomlin loves him. A trusted veteran, has done a nice job in sub packages. Good on special teams; very dependable. In his second stint with the Steelers (returning in 2014) with good upside.

Jordan Dangerfield – Played at a small college (Towson). Might be a huge jump for Dangerfield to make the final 53. Signed by Pittsburgh to a futures contract in 2014. The jury is out.

Robert Golden – Special teams co-captain in 2014, he has been with Pittsburgh ever since 2014. Signed to a one-year tender. This might finally be a big year for Golden. Should play a bigger role.

Alden Perry – Will have an uphill battle. Needs to make some big plays early to stand out. Played one year at Arizona State. Orginally signed by tthe San Diego Chargers in 2014.

Ian Wild – A former CFL player for the Winnipeg Blue Bombers. Signed in 2015 to a futures contract.

Pittsburgh will probably keep four to five safeties this year. It could come down to a numbers game. The first three will probably be Mitchell, Thomas and Will Allen. I predict maybe five guys will fight for the last two spots. Golden and Ventrone will be the favorites because they have experience and do a good job on special teams. Maybe one or two of these guys could make the practice squad.