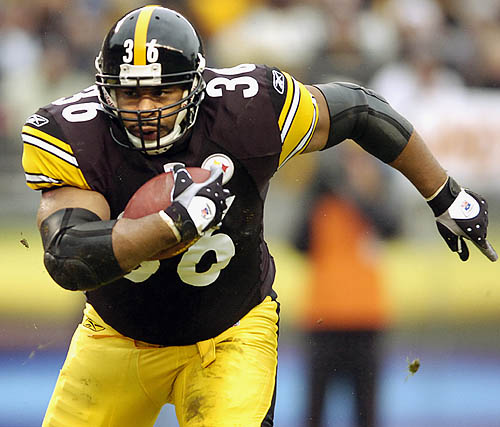 As former Pittsburgh Steelers running back Jerome Bettis prepares to be inducted into the Pro Football Hall of Fame in August, revelations about his life before football are raising some eyebrows.  Most fans of Bettis know that his childhood in Detroit was not always free from negative influences as the city has been plagued with one of the highest crime rates in any major city in the U.S. (per capita).  Bettis recently admitted to syndicated sports radio host Graham Bensinger that he was not immune to his environment, and that he resorted to selling crack and discharging firearms as a youth – often with his brother.  Although the tale is not necessarily unique and is seen by some as an illustration of how many youth who come from unfortunate circumstances overcome them, there are some fans who view Bettis’ testimony with disappointment.

In a conversation with James Jahnke of the Detroit Free Press, Bettis said, “The mind-set was, ‘We’re in the hood.  Mom and Dad, they’re working their butts off.  There’s no money around…so we said…let’s give it a shot.’  And it was one of those moments that you regret, but at the moment, that was the only thing that was really available to us.”  He went on to tell Jahnke that firearms were prevalent in his environment, but his own use was “nothing that (he) ever wanted to glorify.  “I know in retrospect that it was awful…It was a bad decision, but it was the decision that I made and that I lived with at that moment.”

Bettis certainly is not the first young man to have an almost Cinderella-like story of emerging from the ashes of a burnt-out neighborhood into a professional sports career.  That he was able to escape the dangers of his youth, attend college at Notre Dame and enter the NFL with both the Los Angeles Rams and Pittsburgh Steelers is remarkable.  Bettis deserves respect for putting his past behind him to become one of the most genuine people one could ever hope to meet and/or have as a mentor.

Despite the honesty, some are now questioning the level to which they feel Bettis should be seen as a role model to youth while others are heralding him as a perfect example.  “It has become so common to hear young players talk about their time in poor neighborhoods, bad home situations or lives of crime and stepping out of those shadows into the professional sporting world as changed men,” said Pastor Marvin Hammond of the Interfaith Mission on Friday.  “The reality of life is that even the best athletes often become victims of their circumstances while others tackle their past and use it to become better people.  Jerome Bettis is a shining example that you do not have to remain mired in your past.”  Conversely, Damonn Jackson of South Philadelphia said, “While I respect Mr. Bettis’ insights into his past and admission, it makes me wary to tell one of the youth in my football club, ‘This is the guy you want to emulate’.  I want them to realize that a life of crime really has no excuse – not due to poverty or a bad home or lack of parental supervision.  I also don’t want my young players to think that if a man as successful as (Jerome) can sell drugs and shoot at people, they can do the same and come out as professional athletes.  The reality is that there are more cases of tragedy that feel-good stories.”

Although an ongoing discussion could continue regarding Bettis’ honesty and his life choices, when the smoke clears most will see ‘The Bus’ as a man who is humble enough to admit that he understands his past was not something he would encourage others to mirror.  Bettis clearly was able to step from the shadows and move past his mistakes, creating a new life for himself that did not involve crime and focused on the positive aspects of not only sports, but faith.  His words have been genuine, his actions responsible.  It is unlikely that any other individual in the Pro Football Hall of Fame has been inducted without negative life experiences.  In this case, whether football fans see Bettis as an example of good is really in their hands.  Bettis has already moved forward.