From A Hall Of Famer’s Point Of View – Jack Ham 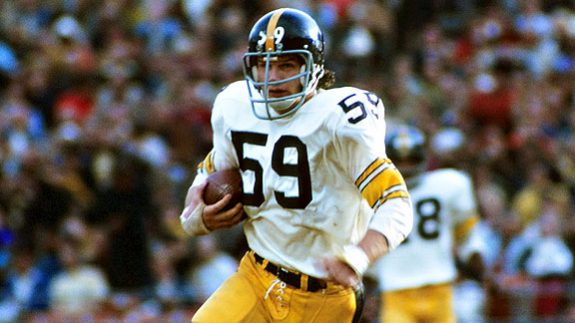 It was a real honor to interview the great Hall of Famer Jack Ham. He provided an interesting perspective on several issues concerning the Pittsburgh Steelers and the state of the NFL.

Rob Smith:  Concerning the linebackers that are currently on the Pittsburgh Steelers, who are: Lawrence Timmons, Ryan Shazier, Arthur Moats, James Harrision, Alvin Dupree, just to name a few… which one do you feel will break out this season?

Jack Ham: Well James Harrison is the established star (laughing). I would have to say Ryan Shazier. He played in a lot of coverage in college at Ohio State.  His speed makes him a difference-maker. He plays at a good weight around 235-240 pounds. He also has some experience playing safety and with the NFL being such a passing league, Shazier has the skill set to succeed.

Rob: When you played, players did not make nearly the amount of money players make today. Do you feel the players today have the same passion you had when you played?

Ham: I believe they do. The average life span of a NFL player is 3 and a half years so they need to make as much as they can now.  When it comes to safety Kam Chancellor from the Seattle Seahawks, he is holding out right now even though he agreed to a contract only a few years ago. When you have a few years remaining on your contract they are not going to renegotiate your contract.

Rob: Jack, you played for so many years. How were you able to last so long with the way the game was so physical?

Ham: When I played I was 225 pounds soaking wet.  Players were much smaller back then.  Joe Greene himself weighed 275 to 280 pounds. When I played, the game was more physical but the players today are so much bigger and faster. When I played ,teams ran the ball so much more and so there was so many coverages today we didn’t have to worry about back then.

Rob:  On paper the Steelers have the toughest schedule… The last time this happened the Steelers won the Super Bowl. What do you feel the Steelers must do to be successful this season?

Ham:  It’s true they have a tough schedule for sure. Ben Roethlisberger said that he will stay healthy the entire season if they run the ball. Despite this being a passing league, the Steelers need to run the ball to be successful. It cannot all fall on the shoulders of Ben Roethlisberger.

Rob: When you look at the NFL today is there any player who (you) feel compares to you?

Ham: Gosh, when I played things were different. There are not many players today that were my size at linebackers. You have a guy like Kam Chancellor who plays safety and weighs 230 pounds. If there was one guy who could translate to today’s game who I played with it would be Mel Blount. Blount was 6’3-6-4 212 pounds and was very physical.

A thank you to XFINITY and XFINITYTV for the opportunity to speak with Mr. Ham.

What is XFINITY TV? XFINITY TV brings customers more of the content they love, wherever they are, on any device. Hundreds of channels, many of which are in HD, from major broadcast, cable and premium networks on TV.  57,000 channel choices including 600 current season TV series are stacked during the current broadcast season and hit movies from all major studios and independent films on XfinityOn Demand – most of which are available for free as part of customer’s subscription. Via the Xfinity TV Go app, you can live stream on-the-go from a selection of more than 90 live channels, or watch more than 23,000 on-demand choices.

With the Xfinity TV app, watch the full channel line-up of live TV in any room in the house on devices with live in-home streaming. Also, use it to access DVR recordings anytime, anywhere on mobile through the X1 Entertainment Operating System – a cloud-based set-top box that lets customers search, navigate and discover tens of thousands of movies and shows in a simple, fast and intuitive way.

Features include: Unified search and instant play, content recommendations and the ability to find entertainment options in seconds from TV listings, DVR recordings, personal favorites and Xfinity On Demand. Specially tailored-for-TV features such as music, radio, sports and weather apps.

More exciting for sports fans is the IntegX1 Sports App. The X1 Sports app is one of the most in-depth, TV sports companion tools in the country, providing pre-game matchups, live in-game stats, and full post-game analysis — all on the same screen as the game itself, for no extra charge.  A series of real-time stats and visualizations is presented along the right-hand side of the screen in a rotating, carrousel fashion just like the sports graphics and news tickers fans are familiar with watching on TV. Developed in partnership with a local Philadelphia technology startup called OneTwoSee, theX1 Sports App pulls in and aggregates data from several sources to rate games based on team records, compute each team’s win probability and preview position matchups. Fans get to see real-time stats, analysis during the game and which players racked up the most fantasy points immediately in the post-game recap.

Xfinity Sports App on X1 – on the same screen as the game itself (for no extra charge) – is just in time for the kickoff of the NFL season (and MLB playoffs), with Comcast re-engineering the app to give fans more data and statistics typically only available on the second screen.  And the X1 Sports App works across any channel for its supported leagues (MLB, NFL, NCAAF,  NCAAB, NBA, NHL, NASCAR, and many various soccer leagues).