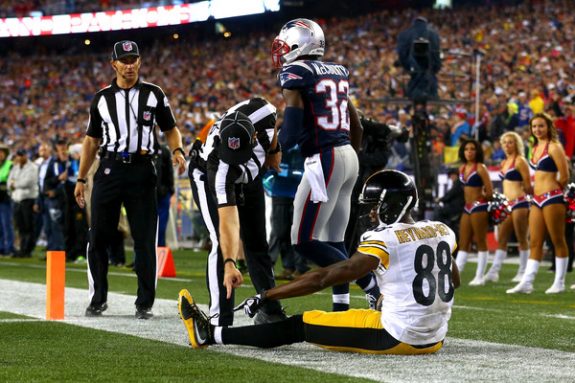 After Thursday’s practice, Pittsburgh Steelers offensive coordinator Todd Haley spoke to the media about the team.  Among the questions asked were the missed opportunity of receiver Darrius Heyward-Bey in his near-touchdown against the New England Patriots, the progress of Antonio Brown and players that may give the Steelers a boost against the San Francisco 49ers on Sunday.

Did you like your numbers last week despite not scoring?

“The name of the game is scoring. When you have 450 yards, you really should score 30 points. We obviously left points out there. We had nine possessions. We crossed the 50-yard line seven times. We only scored on four of those seven times. Even if you just kick a field goal every time you cross the 50-yard line, you are at 21 points. Sneak in a couple of touchdowns, all of a sudden you are at 30 points, which is the name of the game. We just have to be more productive. And it fell on a little bit of everybody. There was a bad call there early. It was turned into a worse call with the penalty. We had a penalty on the one-yard line later in the game. Darrius Heyward-Bey not keeping his feet in on what would have been a nice end of the half touchdown for us. It was a little bit of everybody not quite finishing, and we have to be better.”

Haley said that one of the things that encourages him about the ability of the Steelers offense to play well against the 49ers is ball-movement.  “You have to be able to move the ball in this league,” Haley said.  “You can’t count on turnovers or big returns….I thought we ran the ball pretty efficiently…and we threw the ball efficiently.”  One area Haley said the Steelers have got to correct is turnovers – even though Pittsburgh did not really have that issue and were relatively solid when it came to offensive penalties.

When asked about the trick play called early in the game that led to Antonio Brown being asked to throw the ball and if it was a bad option, Haley said, “Yeah.  I will take that as a bad call.  When they don’t work they are ball calls [smile].”  According to Haley, the play was not scripted but was something the team has practiced.  “(Brown) has been terrific with the ball in his hands for the most part.  We had a defense that we really weren’t expecting, which kind of added to badness of the call, if you will.”  Haley called Brown a “playmaker”, pointing out to the media assembled that the receiver has grown and that his level of skill has improved.  “That’s just his will and desire to make a play successful.  When you have that trait, it obviously makes for good and exciting things.”

Tyler Murphy got the start at receiver over Sammie Coates in New England and questions about Coates’ readiness were brought up on Thursday.  “He is working hard,” Haley said.  “Again, it’s a tough position to break into with this group.  We saw it last year with Martavis Bryant.  The advantage Tyler Murphy has last week was that he knew multiple positions.  When you just have a couple [receivers] available, you have to be very smart and have an understanding that if something happens to Markus Wheaton or Antonio Brown, how are we adjusting so we aren’t left sitting there with half the game plan out of the mix.”