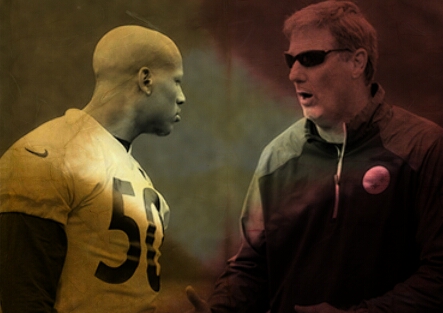 Pittsburgh Steelers defensive coordinator Keith Butler has had much to say about last week’s performance, including some diagnosis of the players.  Certain players seem to be on the rise with Keith Butler.

Butler felt that Jarvis Jones had an above average game. “He did some things well but could have done some things better.” From the sound of things Jones’s starting spot is safe at least in the short term. His coverage needs improvement and a multi-sack game is well overdue.

It is encouraging that cornerback Ross Cockrell has fared well at practice vs star receiver Antonio Brown. “It’s encouraging me you have confidence to work against the best.” Better practices will put Cockrell on the field, possibly this week.

The defensive game will likely be different this week as the 49ers are a more physical team with two running threats in Carlos Hyde and quarterback Colin Kapernick.

Wide reciever Anquan Boldin is also very physical on the outside and the slot.